Whispers of the Old Gods – The Entourage of Y'Shaarj

This week, we explore a wickedly powerful Old God, Y’Shaarj (pronounced YAH-sha-raj), who teaches us that seven heads are better than one.

Grumpy Old Y’Shaarj
The biggest Old God on the block, Y’Shaarj was once the head of the largest empire to ever grip the face of Azeroth. This magnificently malignant entity had a real head for the political game, and raised armies of hideously devoted servants to do its bidding. Even the other Old Gods were impressed!

But even with such great power—not to mention a swanky temple city—Y’Shaarj still had some anger issues. Who wouldn’t be miffed after having pieces of yourself strewn about everywhere, while scruffy little mortals panda-handled your heart? These truly heart-wrenching events in Y’Shaarj’s past are why the moody Old God tends to be the death of the party. Its (last) terrible breath* doesn’t just clear rooms—it clears whole continents! Despite appalling personal hygiene, Y’Shaarj has a way of clutching hearts and changing minds; even the most willful of beings cannot resist following it onto the battlefield. 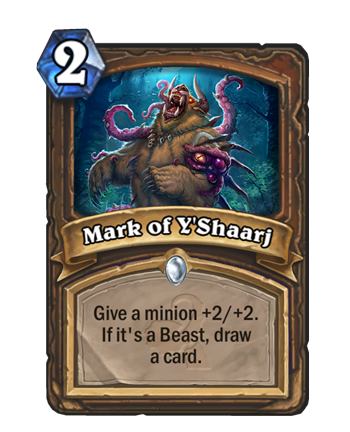 Mark of Y’Shaarj
What Druid minion wouldn’t want to be branded by the most powerful Old God OF ALL TIME?! Y’Shaarj can’t wait to unveil its Spring collection. Beauty is pain, but at least they’ll look really, really, really ridiculously evil looking in this tasteful ensemble of eyeballs and tentacles. Unbearably fetching! 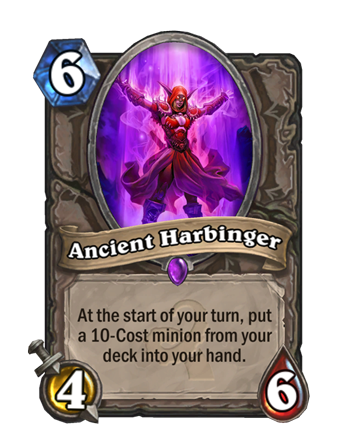 Ancient Harbinger
Old Gods, like Y’Shaarj, enjoy arriving in terrifying style, and no one portends their ominous appearance quite like the Ancient Harbinger. This super cultist specializes in beckoning only the mightiest of Tavern denizens. Mere mortals must wait in line to join the party, but the Ancient Harbinger ensures that the Old Gods receive the VIP** treatment they deserve.

We hope you enjoyed bearing witness to Y’Shaarj’s boundless power. There’s one more Old God lurking in the dark, so remain agog for the Yogg blog (and card reveals)!

Help spread Y’Shaarj’s influence to your friends and followers using the #OldGods hashtag. Y’Shaarj wonders why they weren’t called Whispers and Headbook...