It started in the inns and taverns, and the sight was always the same: two players studying the game board intently, laying down cards, smiling or snarling as they won or lost. Crowds soon gathered to watch. The game's popularity surged, and before long, you could find Hearthstone game boards all across Azeroth. You'd see players in cities, in merchant convoys, on ships at sea, in barracks and tents within military outposts. You've probably even spotted a few games in your garrison shortly after you arrived on Draenor. 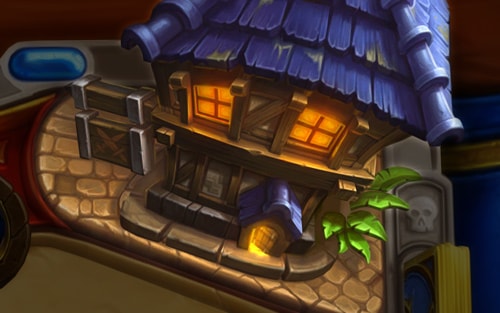 But it began in the inns, and if you want the true Hearthstone experience, there's no better place to play. And there's one inn that rises above all the rest. The one with the innkeeper.

The one where it truly began.

It's not easy to find. Most visitors can't tell you how they got there. A squad of orcs will say they stumbled in off the streets of Orgrimmar during an unseasonable storm. A caravan of gnome traders might claim they slogged through the Swamp of Sorrows for days before finding the inn in the middle of nowhere.

All around the inn's common room, you will find stories of hard travels, tough fighting, and dangerous adventuring, of digging through snowed-out mountain passes and trudging across unforgiving desert plains.

There is one constant: all found the inn when they needed it most, when they thought they couldn't walk another step or face another day. They discovered the right inn at the right time.

It doesn't matter what faction they represent, what world they hail from, whether they walked into the common room alone or with a group, whether they're unarmed or clad in the finest armor. There to greet them all is innkeeper Stonebrew, the dwarf with a twinkle in his eye and quick hands that can top off a mug and slide it into your grasp before you sit down. If you're looking for a game of Hearthstone, he'll find you an empty seat. If you want to learn how to play, he'll sit across from you and walk you through a friendly match. If you want to watch others compete, he'll lead you to a spot with a view. Whatever you need to warm your soul or soothe your worries, he'll provide.

Just don't cause any trouble. 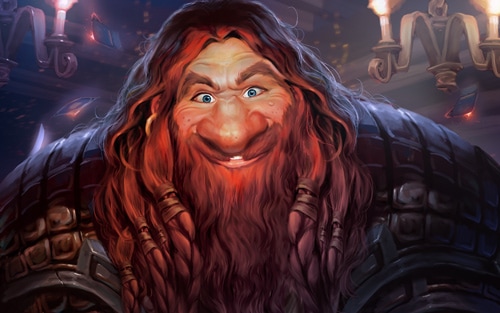 Oh, sure, the inn gets rowdy from time to time; there's no debating that. When two salty types sit down at a Hearthstone table, it's not uncommon to see a few punches traded once the match ends. Ask any dwarf: a night of fun isn't done without a brawl or two. But stick to your fists. Don't pull out any weapons—no blades, no clubs, no axes, no magic with ill intent. Cross that line… well, don't say you weren't warned. The innkeeper is stronger than he looks. You'd probably find yourself flying out of the front door before you landed a single blow, and if you were very, very lucky, you'd end up on a street in a city you recognized.

And this should go without saying: don't cheat. The innkeeper hates cheating. There are tales of poor souls who are doomed forever to draw nothing but Magma Ragers and Angry Chickens for the rest of their days. Play fair, and you won't need to learn firsthand whether those stories are true.

When the night is old and last call is long past, you may find yourself leaving the inn with a Hearthstone board tucked under your arm. Keep it. Most people have trouble finding this inn more than twice in a year. But with a game board of your own, you can share the Hearthstone experience with anyone you please. Plenty of folks even gather together in large groups every week. If someone else has already started one of these Fireside Gatherings near your abode, join in! A night of camaraderie and fellowship has more power than most would suspect.

If there's not a gathering near you, perhaps you are meant to start one yourself. Either way, it's difficult to stay away from the sounds of laughter and cheering. Sit down at a table, strike up a conversation, and join the fun. You never know whom you'll meet.

Maybe you'll even cross paths with a familiar, friendly dwarf as he refills your mug, slaps you on the back, and howls with you as a competitor clears the board with an impossibly lucky play. You won't see him arrive, and you won't notice him leaving, but that's not so strange.

A night of fun is a powerful thing, after all.