In the year of the Mammoth, you embarked on many memorable quests! You explored steamy jungles in search of primordial mysteries in Journey to Un’goro. You embraced the deadly power of the Lich King in Knights of the Frozen Throne. You delved deep into trap-infested tunnels to loot incredible treasures in Kobolds & Catacombs. Now, one last legendary quest remains in the Year of the Mammoth, and the rewards are beyond your wildest dreams!

Introducing the Quest for Packs Sweepstakes!

Everybody loves opening Hearthstone card packs. . . . How would you like a chance to open 3,000 of them?

To celebrate the amazing adventures we had together in the Year of the Mammoth, starting at 17:00 GMT on February 1 and up until 06:00 CET on February 15, each daily Quest* you complete during the Quest for Packs grants you one entry for a chance to win 3,000 Hearthstone card packs, the Lich King’s helm, and more!

It’s incredibly easy to enter—just log in and complete your daily Quests! That’s it!

The rewards for this quest are very rich indeed! You could win one of these prizes:

Grand Prize – One (1) grand prize winner will receive a prize package including:

Mammoth Pack – Fifty thousand (50,000) players will receive three card packs—one from each expansion released during the Year of the Mammoth.

You can win a free Mammoth Card Bundle when you Quest for Packs, but for a limited time (starting with the arrival of the upcoming 10.2 Update), you’ll also be able to purchase one. 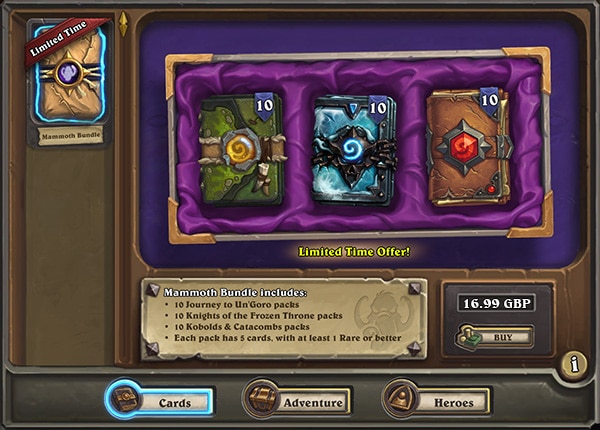 Purchase is limited to one Mammoth Card Bundle per account.

Please read the rules for eligibility, and happy Hearthstone Questing! We’ll see you in the tavern!

*Entries limited to a maximum of fourteen (14) per Battle.net account and one (1) entry per day.