Welcome to the Hearthstone Global Games 2018!

Everyone, get in here—because we’ll soon be going to the polls to decide the teams for the 2018 Hearthstone Global Games (HGG)! Until then, though, here’s a rundown of the full program.

Following the conclusion of the voting period, this year's HGG teams can be found on the HGG site. 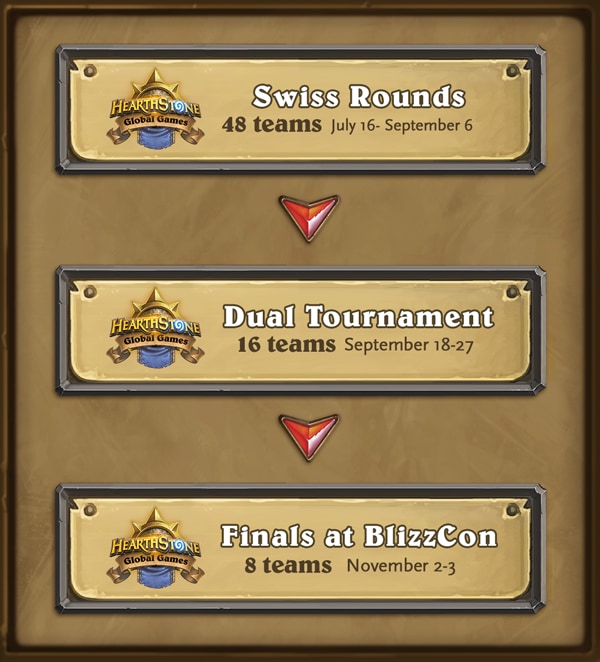 HGG 2018 will once again feature 48 countries and regions. This time, the first phase will be a Swiss-format bracket that includes all 48 teams. The Swiss rounds will run from mid-July to early September, and will pare the bracket down to just 16 teams.

After that, we’ll take a short break before heading into the Round of 16, which will be played in dual tournament format. This will last two weeks in September and will identify the eight teams advancing to the playoffs. The HGG playoffs this year will take place at BlizzCon 2018!

Here's who will take you along this year's HGG Road to BlizzCon!

Want to keep up with the action? Here are specific dates and times for all HGG 2018 broadcasts, which will air on the official PlayHearthstone Twitch channel.

Dates are subject to change.

Apart from the tournament broadcasts, we also have a weekly show focused on the Hearthstone Global Games! Catch that on Twitch at 7:00 p.m. CET / 10:00 a.m. PDT / 2:00 a.m. KST on Mondays each week the broadcast runs.

My country has not been included in the Hearthstone Global Games. Why?

Why is HGG focused on competitive point earners rather than community figures this year?

We want to focus on the highly-competitive aspect of this prestigious tournament.

I am eligible to be voted for but was not contacted. Who should I contact?

Please send us an email at HearthstoneAdmin@blizzard.com and include “[HGG VOTING]” in your subject line.

Where will the broadcast be aired?

You can watch all HGG broadcasts on the official Hearthstone Twitch channel.

Voting for HGG 2018 will begin very soon. Meanwhile, share your thoughts on #HGG2018 with us on the official Hearthstone Esports Twitter!