The Witchwood, Hearthstone’s latest expansion, is full of cursed monsters and things that go bump in the night. Those brave enough to venture deep into the forest can embark on a thrilling Monster Hunt to fight the source of these evils. Read along as Hearthstone mission designers Paul Nguyen and Giovanni Scarpati share some insights about the development of Monster Hunt, including the evolution of the mode’s potent Hero Powers, that time they tried to recreate tower defense in a card game, and the creation of everyone’s new favorite dog walker.

Who Let the Hounds Out? 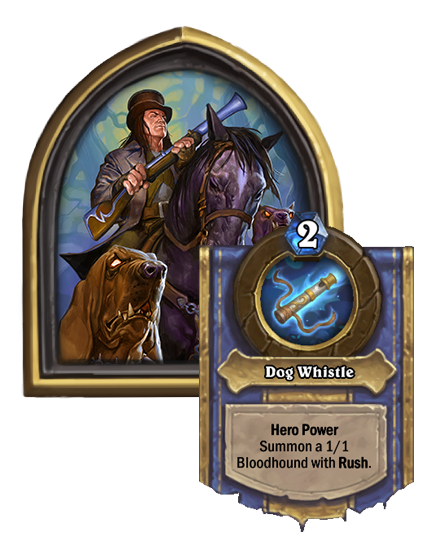 Giovanni Scarpati: Early on in the development of Monster Hunt, we knew we wanted to have a hero centered around the new Rush mechanic. We liked the idea of a houndmaster who could send his faithful companions rushing into the woods, in hot pursuit of his enemies.

Paul Nguyen: A character really comes to life when all the pieces start coming together. Dave Kosak wrote all these fun voice lines, then we had a voice actor come in, who did an amazing job bringing the Houndmaster to life. You start with a basic premise, like, “Okay, we’re going to have a character that hunts with dogs.” But by the time you see it fully-realized and hear all the voice lines and interactions, it’s grown into something greater than you initially imagined. It’s awesome to see.

Giovanni: The community reception has been fantastic. It makes me want to keep fleshing out these characters. A lot of players have actually been asking for Shaw to be a Hero for the Hunter class, just because he emotes are so great; there’s a ton of character in just a couple of voice lines. It has been great to see the love the community has given our Monster Hunters.

Paul: Another thing that made Shaw real for me was when we created his three prized hounds: Princess, Butch, and Bubba. Once Shaw and his dogs started to really take shape, everything felt more connected and fun. Maybe too much fun—wasn’t Shaw able to defeat Hagatha by himself in early playtests?

Giovanni: Yeah, we originally had Scavenging Hyena in his deck. If you got one of those out, you could immediately buff it from your board and Hero Power. If you had cloak of invisibility, or anything to protect it, you could play a Crackling Razormaw and give it Windfury, and suddenly you had this 20/20 hitting Hagatha twice every turn. 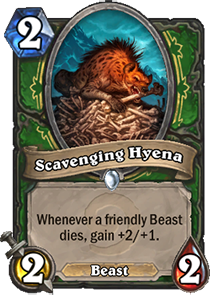 Paul: Players can still loot a Scavenging Hyena to add to their deck, but it was too powerful to include from the start. Honestly, I’m a bit surprised we shipped Butch, seeing how alarmed we were about the Scavenging Hyena interaction. Let’s just have one that doesn’t care when the beast dies . . . that’s totally OK!

Giovanni: Well, Shaw has trained a lot of dogs in his day, but Butch is one of his prized hounds—and for good reason! It’s important for the fantasy of each Hero to shine through, especially in their unique treasure cards.

Paul: Another element that really helps define each Hero’s identity is also the nemesis. 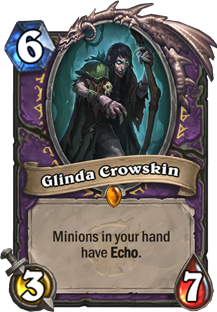 Giovanni: Very true. With each nemesis, we wanted to have some sort of story element that tied together either a big baddie that existed in the lore, or took a main character from the collectible set and established why they are a villain. Glinda Crowskin was a minion from the collectible set, but all we knew is that she was a witch who lived in the swamp. We pushed her story and added a yin and yang element to the encounter with her Hero Power. The Houndmaster is sniffing around with this board full of minions, but when Glinda’s immune, what value does that have? You’ll have to get creative to find a way for your hounds to sink their teeth into her. 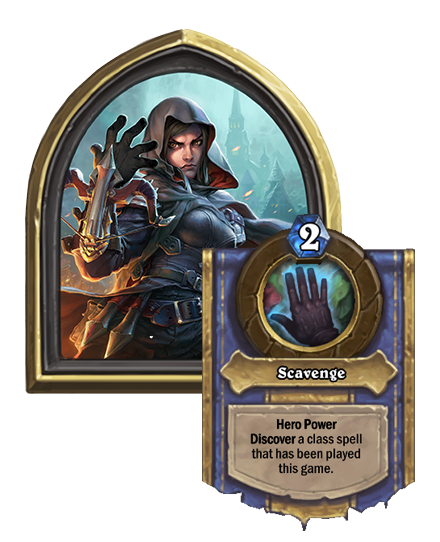 Giovanni: The Houndmaster started with mechanics, but with the Tracker, we thought it was more appropriate to start with the character. Once we knew we were doing Gilneas, we knew we had to get Tess Greymane into the game, especially on the single-player side.

Paul: Yeah, and we started her off with the most complicated Hero Power we could come up with for her: for two mana, Discover a “bounty hunter” weapon.

Giovanni: It sounds simple at first, but each time you Discovered one of these bounty hunter weapons, you wouldn’t be able to choose it again. So after using Tess’ Hero Power three times, you’d be out of weapons—and that’s when you could scavenge the battlefield. The concept fit nicely with the lore, but it was too complex mechanically. In testing, players often wouldn’t realize they could get to the scavenge portion—it felt more like an Easter egg than something we intended them to take advantage of.

Paul: Scavenge became the star of the show once we did a team-wide playtest. People kept telling us how fun it was to scavenge for spells, so we decided to make that the focus of her design. We kept the bounty hunter weapons though, as a separate treasure: Tools of the Trade. Feedback has such a huge impact, and helps us see things we couldn’t see before.

One of the most common pieces of feedback we’ve gotten on Tess’ Hero Power is how awesome it is to reveal which Secret your opponent just played.

Giovanni: Toki and Tess can both achieve that with their Hero Powers. Tess is very methodical—she checks ahead to see what the Secret is, then can decide to use it against her enemy. Meanwhile, Toki just throws her face at Secrets and says, “Oh, that’s what that does!”, and rewinds. 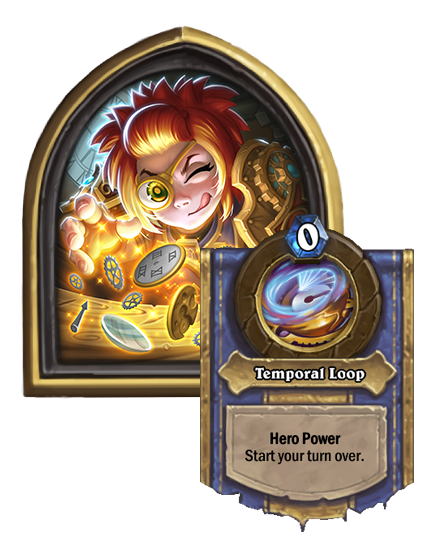 Paul: Speaking of Toki, what are the origins of this mysterious, time-traveling gnome? Well, when we were thinking up new Hero Powers for the mission set, we started playing with the idea of resetting your turn. I put together this really hacked-together prototype version, and within the first three turns, I fell in love with it. I was just cackling like crazy—when I reset my first Mad Bomber, I said “this is it!”

Giovanni: Once we decided to go with the “turn reset” Hero Power, we had to figure out who in Gilneas would have this kind of power. Wasn’t the first pitch a fortune teller?

Paul: Yeah, it was actually the fortune teller from the Whispers of the Old Gods trailer. But I’m glad we ended up creating Toki. I don’t think she became a fully realized character until we found her nemesis, though. Everything kind of clicked as soon as you said, “Why not fight future Toki?”

Giovanni: What a more fitting nemesis for a time traveler than herself? Infinite Toki takes everything fun about Toki and amplifies it—makes it villainous.

Paul: I kind of feel like a villain when I play Toki, because she basically lets you cheat at Hearthstone. It was especially crazy in our early versions, when you could use her Hero Power as many times as you wanted every turn. That was way too powerful, so we had to scale it back—but players can still live that fantasy with cards like Auctioneer Beardo and Coldarra Drake. If you add those cards to your Monster Hunt deck, have fun and re-roll to your heart’s content! 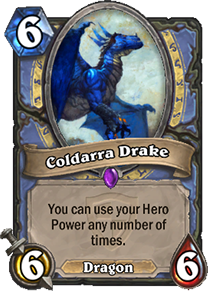 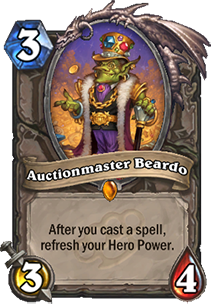 Giovanni: One of the downsides to not being time travelers is that we still don’t know that much about Toki—but I think that’s exciting. There are a lot of places we could go with her. I love to see how the community reacts to our characters. Who do they latch on to? Who do they want to see more of? It’s fun to go with that flow—our players really do help shape Hearthstone’s lore.

Paul: A great example is when A. F. Kay showed up in Knights of the Frozen Throne. She was just a side character, but she had this proper name, so we gave her Legendary status. Then Andy Brock, one of our sound designers, said, “What if we added this whistling?” and that became a thing. The community loved her, so we knew we had to bring her back for Dungeon Runs in Kobolds & Catacombs.

Giovanni: There’s a lot of love for her, and for Infinite Toki. I’ve seen some really cool fan art floating around. I’ll have to ask her what the future holds.

Cannons at the Ready! 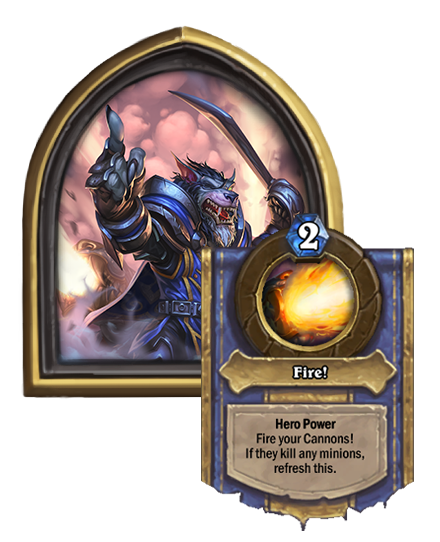 Giovanni: So how did the Cannoneer come about, Paul? I know you were experimenting with that concept for a long time.

Paul: This actually goes way back. After we finished Dungeon Runs, we spent some time figuring out what to do next. We knew the setting of the next expansion was going to be Gilneas, so I imagined scenarios where players would defend the city against an incursion—against waves and waves of monsters. I ended up building a tower defense scenario, but it never quite “got there.” The tower mechanics were really fun, but also complex, so we kept simplifying them until we eventually had just a single cannon on the board.

Giovanni: Yeah, that’s about the time I joined. We had just committed to doing Monster Hunt, and we already basically had one of the Monster Hunters done! In the early days when we were testing him, he was consistently the weakest. People tended to see the cool Hero Power and figure they could just spam the cannon. But using the cannon early can put you super far behind on board, so when the boss plays some big minions, you can’t defend against them.

Paul: Yeah, we talked a lot about making his Hero Power cost less or deal more damage, but we ended up putting a unique treasure in his deck—Extra Powder, which costs one mana and gives your cannon +2 damage. Players have probably noticed that he’s the only character with a treasure in their starting deck. 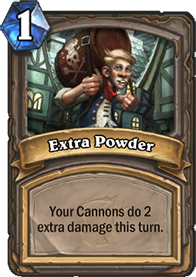 Giovanni: And once you start getting more treasures, like Dragonfire Ammo or Tactical Reinforcements, you can start relying on the cannon more heavily because it provides so much more value.

Paul: The main thing, though, when playing the Cannoneer, is that you also have to rely on positioning. That was the design intent—to make positioning matter. That ended up working really well with Rush, because you can play something from your hand to change your board position, and potentially also change the enemy’s board position.

Giovanni: Ultimately, each of the Monster Hunters is meant to appeal to a different kind of player. As you can see, the Cannoneer is very tactical. Tess is future-minded, in that she rewards players who set up combos in advance. Houndmaster Shaw is fun for players who want to Rush in and go face—to live in the “now.” And Toki lets players have fun, try random stuff, and have an escape plan if things don’t work out. You can tell a lot about a player by which monster hunters they prefer!

Has learning more about Monster Hunt whetted your appetite for the hunt? Monster Hunt is a free, single-player Hearthstone experience, so log in and embark on your own hunt today! Learn more about the story behind each Monster Hunter—and the other notable denizens of Gilneas and the Witchwood—by reading the Mysterious Missives series. (Part 1, Part 2, Part 3).