So Here’s the Plan: Chapters I & II of The Dalaran Heist: NOW LIVE!

Arch-Villain Rafaam has meticulously assembled a league of menacing and megalomaniacal supervillains to undertake his most audacious caper yet—stealing the magical city of Dalaran! As low-level operatives in Rafaam's League of E.V.I.L., you'll rampage through the streets, spires, and sewers of Dalaran ensuring that every part of the plan succeeds. Or, at the very least, provide a useful distraction as the League accomplishes its devious goals. Now, where to begin. . . .

Our First Target – Breaking The Bank 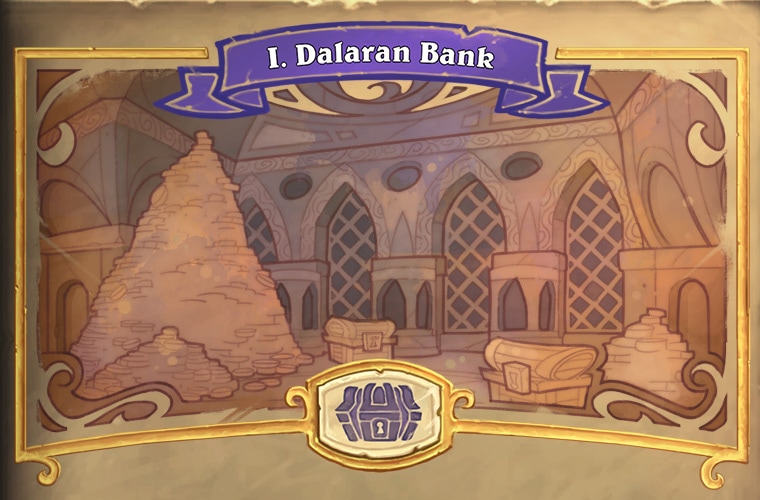 Shiny, shiny, shiny! According to Togwaggle, risking life and limb (and candle) to battle the Defenders of Dalaran is only worth the effort if it means achieving his life-long dream . . . stockpiling tons of loot! That’s why he’s wrangling his henchmen and headed for the most treasured vault in the land . . . the Dalaran Bank!

Tussling in the treasury means there are tons of resources lying around to batter, beat, and bribe your way to victory. At the beginning of every match in the Dalaran Bank, you’ll find a “Cache of Cash” lying on the battlefield that, when broken, grants you (and your opponent!) two Coins. You can use these to gain an advantage, but be careful, as your greed could backfire!

The Dalaran Bank is the first chapter of The Dalaran Heist, and available completely FREE to everyone on May 16.

Who’s up to the Task? 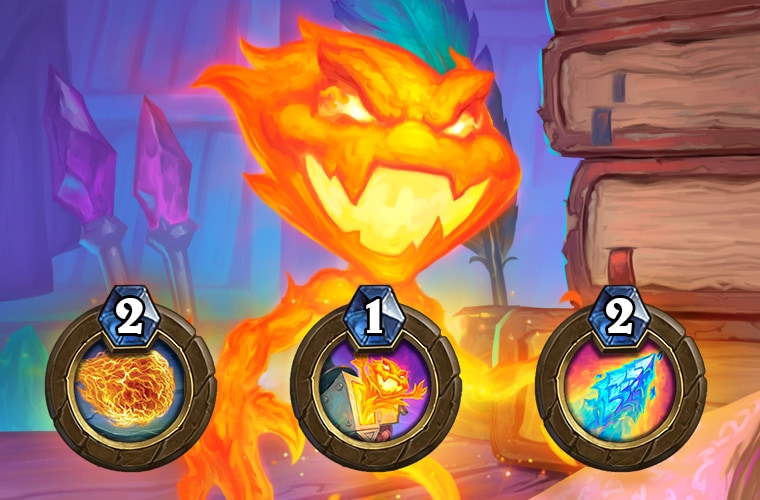 Cracking the coffers on the magical mint requires a certain spark of genius. To get things warmed up, Togwaggle has entrusted Rakanishu, the mischievous fire elemental living in the lantern atop his head, to slip past the guards and loosen their grip on the goods!

As the League of E.V.I.L.’s kindling apprentice Mage, this criminal element and fiery familiar is no stranger to manipulating magic. By completing challenges in the magical city, Rakanishu will gain access to Mage Hero Powers in addition to the standard Fireblast. Defeating bosses will also open up awesome new themed starting decks to be used in future runs.

Looking for details on these brand-new Hero Powers and themed decks? You can take a peek at what Rakanishu has to offer by watching the Dalaran Heist Hijinks Hearthside Chat video, but you’ll have to embark on the heist to discover the rest for yourself. No spoilers!

Rakanishu will be available to all players brave enough (and unscrupulous enough) to attempt to liberate Dalaran of its treasures in the first chapter of the Dalaran Heist. 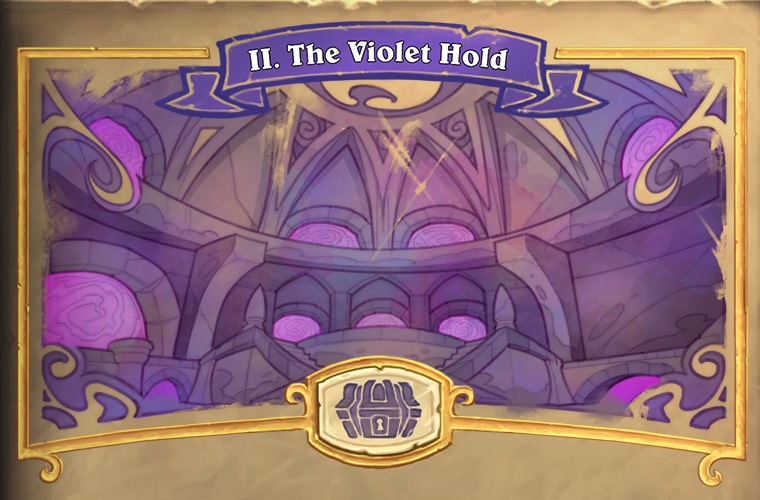 Hagatha’s plan is simple . . . sow chaos in the streets and overwhelm the guards of Dalaran with teeth, claws, spells, and . . . gnomes? A good villain never gets their hands dirty, though—it’s going to be up to the hired help to rip open the Violet Hold and release the prisoners held within on the unsuspecting Defenders of Dalaran!

There’s no predicting how these ferocious beasts and fiendish prisoners might behave once released from captivity. They may even battle by your opponent’s side! At the beginning of each match in the Violet Hold, a random imprisoned minion will appear on each side of the battlefield. These minions will work to free themselves over the course of the match, with each turn bringing them closer to breaking their bonds. Stronger minions will require more turns before they can wreak havoc on their opponent.

The Violet Hold is the second chapter of the Dalaran Heist, launching alongside the Dalaran Bank on May 16. Once it’s available, you’ll be able to obtain this chapter as part of the complete Dalaran Heist for $19.99. You can also grab The Violet Hold, or other individual chapters, for $6.99 or 700 Gold each by purchasing them in the in-game shop. 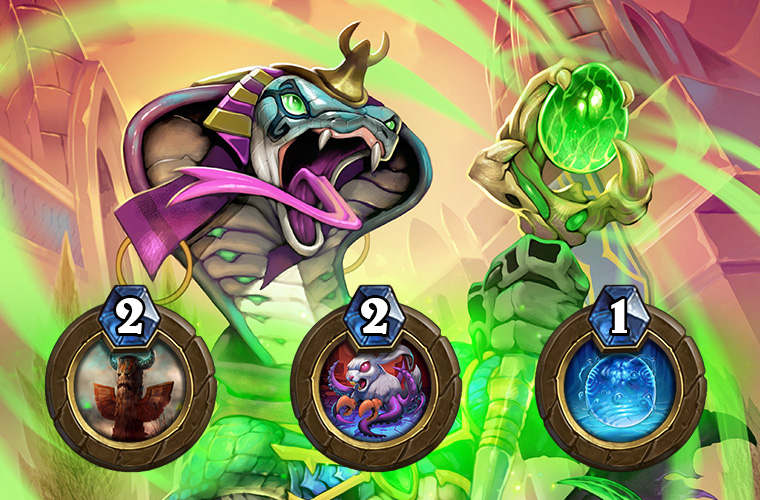 Vessina, Hagatha’s shamanic serpentine sidekick, is setting her sights on springing the shackled scallywags soundly secured within the Violet Hold. Vessina will be playable for everyone who owns Chapter II of the Dalaran Heist, The Violet Hold. 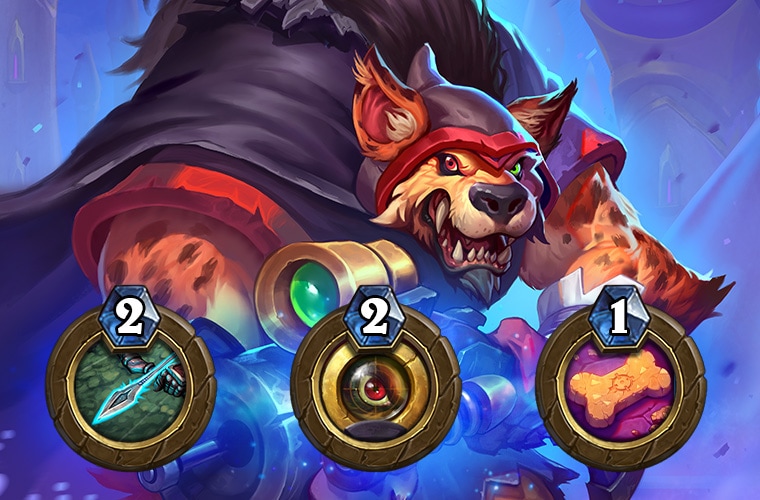 Who gave a high-powered sniper rifle to a gnoll? The League of E.V.I.L., of course! What else is there to say about this sharp-toothed and sharp-sighted Hunter Hero? Ol’ Barkeye will also be playable for everyone who owns Chapter II of the Dalaran Heist, The Violet Hold.

As with the other Dalaran Heist Anti-Heroes, Vessina and Ol’ Barkeye will also have to complete unique challenges in order to unlock two new Hero Powers each, and best bosses to bolster their starting deck options.

We hope you’ve enjoyed this sneak peek at the first two chapters of the Dalaran Heist, releasing May 16, 2019. We’ll see you in Dalaran, henchman!