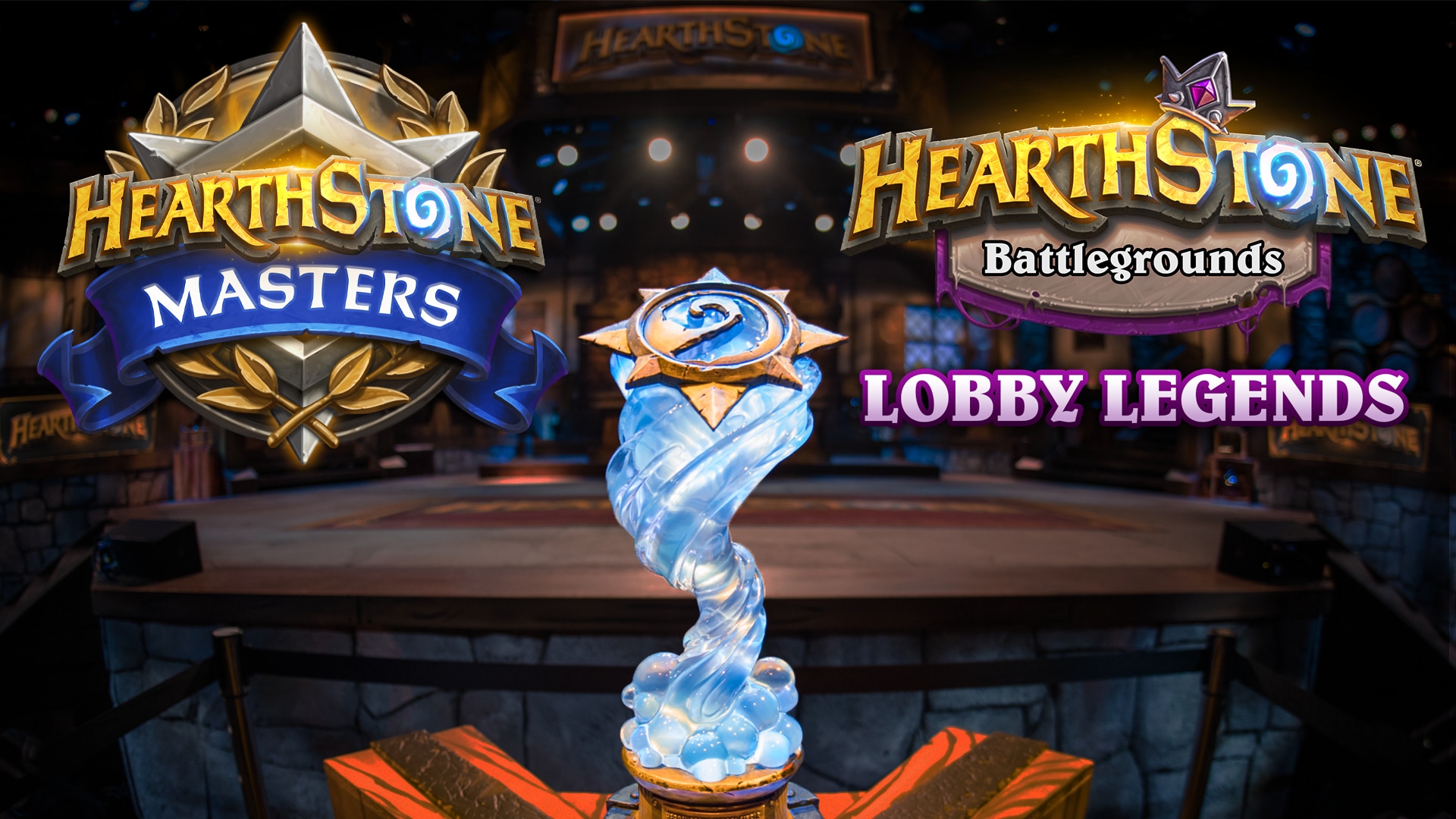 As we enter 2022, the Hearthstone Esports team is reexamining how to best nurture the long-term sustainability of competitive Hearthstone and how best to support this incredible, and global, community. From an expanded World Championship to new seasonal Masters Tour tournaments, the sunsetting of Grandmasters, and the introduction of monthly Battlegrounds events, Hearthstone Esports is evolving, and we can’t wait to share the new ecosystem with you!

With so much going on or changing in 2022, here is a quick breakdown of what you can expect before jumping into the full announcement: 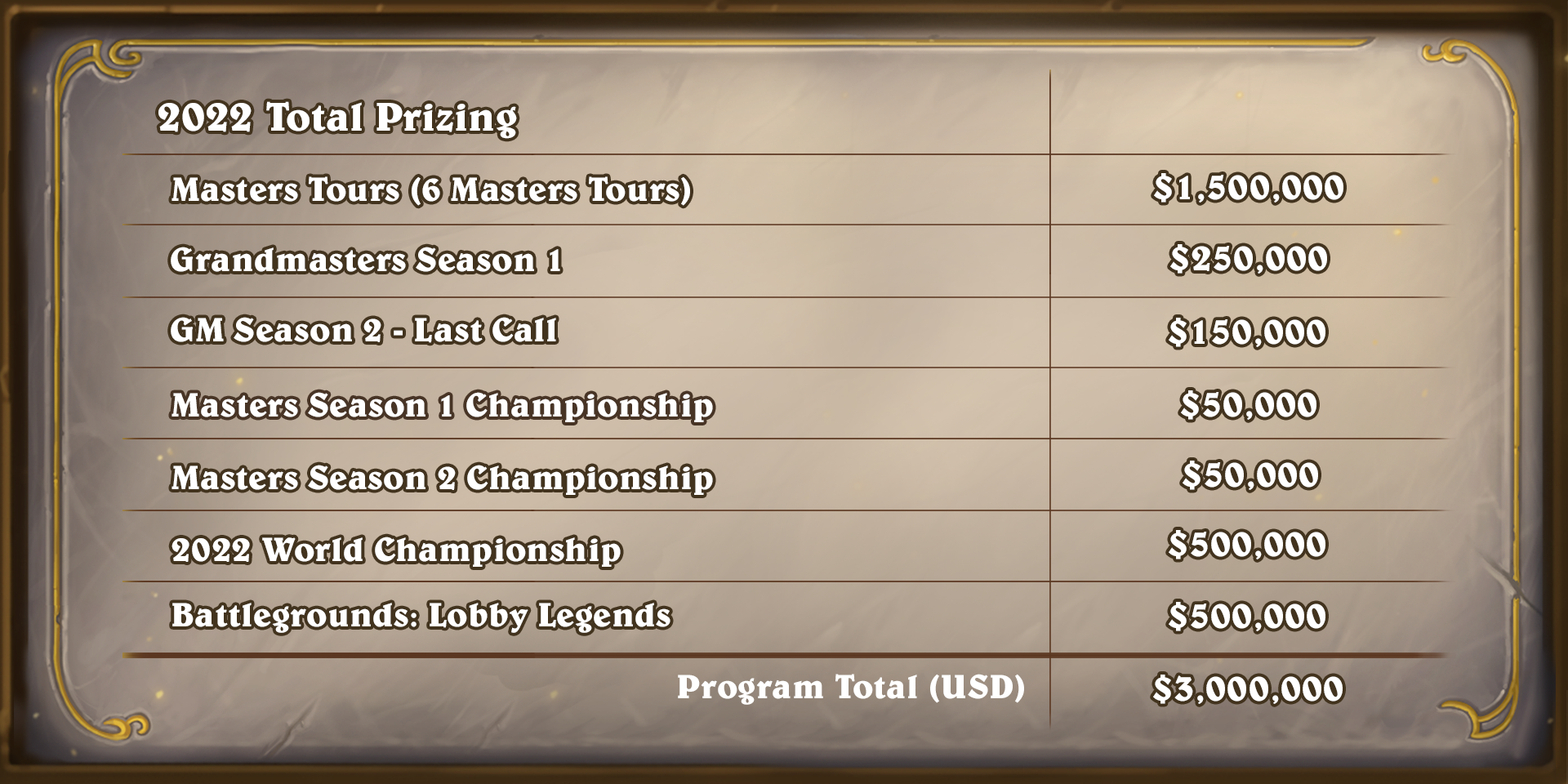 A key goal for this year is to expand opportunities for players to reach the World Championship. One piece of feedback we have heard from the community is players felt reaching the culminating tournament had become nearly unattainable, even for the best players. Many of the changes coming in 2022 feed directly into resolving this issue.

Toward this end, we are expanding to 16 players that will face off for their shot to join the Hall of Champions and the lion’s share of the $500,000 (USD) prize pool. Grandmasters will also no longer be the sole arbiter of invites. Throughout the year, four Grandmasters will advance to the World Championship, along with another four players from China, and the final eight spots will go to the best players across the Masters Tour through Season Championship events. Let’s go in-depth on how Grandmasters and the Masters Tour fit within this new World Championship structure! 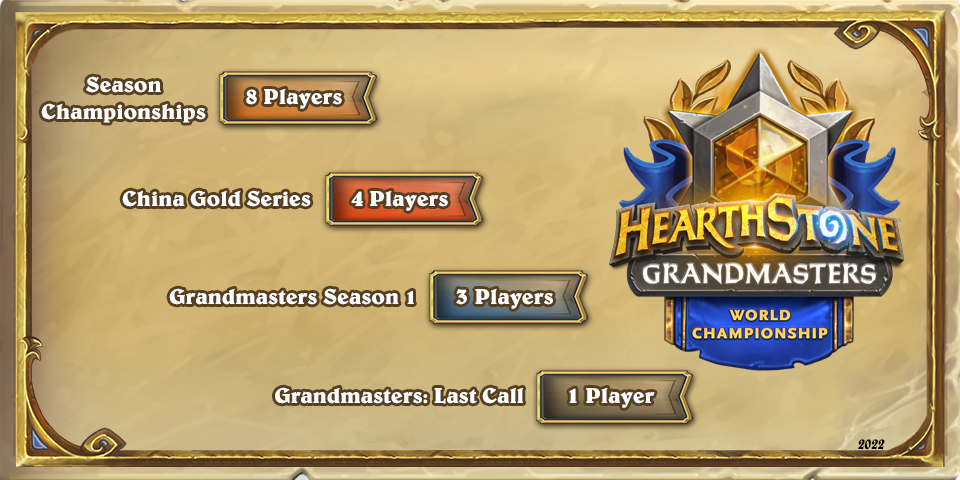 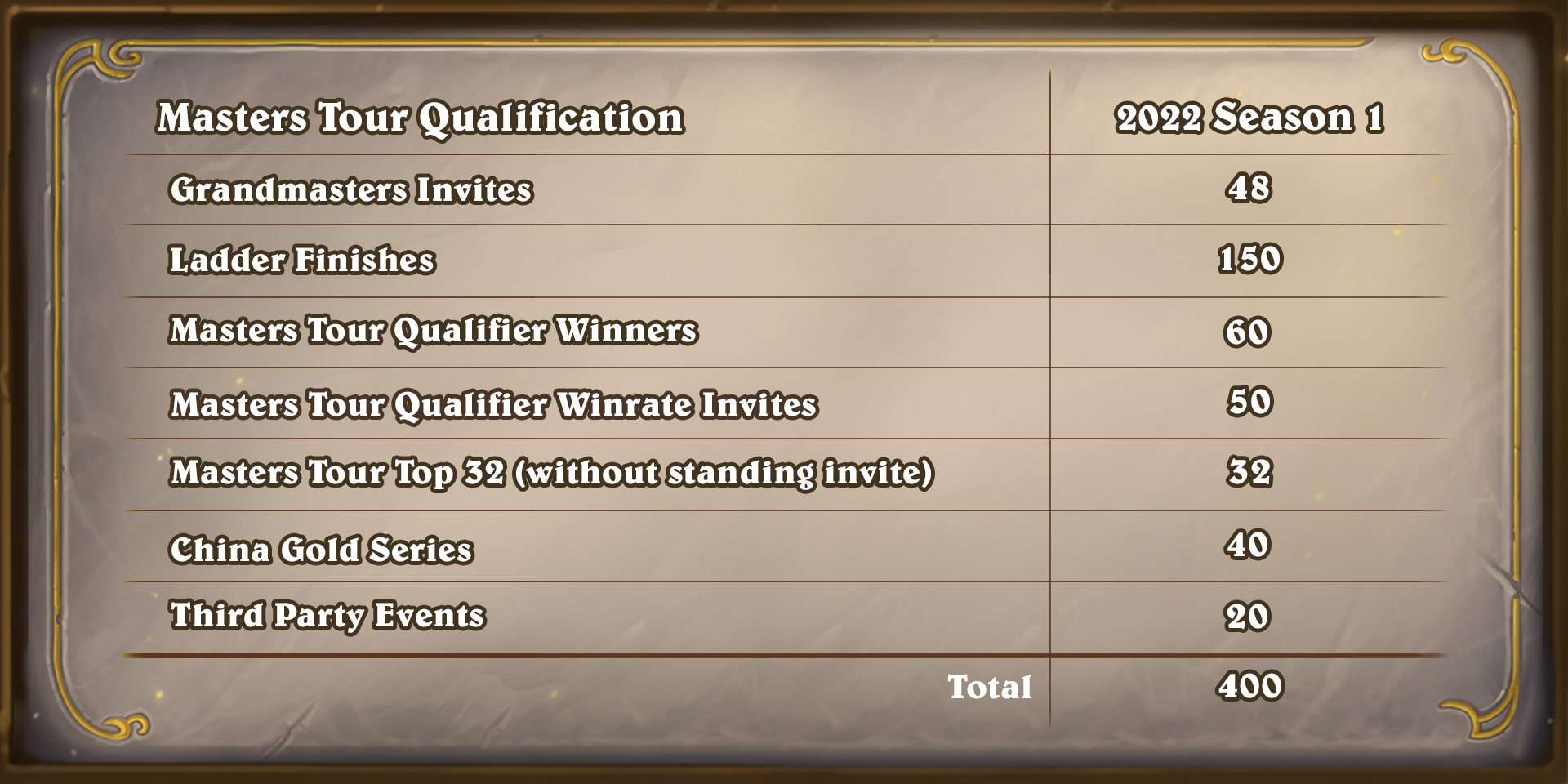 All 2022 Masters Tours will be held as online-only tournaments. We know how disappointed all our players are at not being able to experience these tournaments together in one place, and the entire Hearthstone Esports team shares that feeling. While the Masters Tours are going to remain online for now, we are targeting an in-person event for both the Masters Fall Championship and World Championship. Over the coming months we will have more news on the viability of these onsite events, and whatever we decide will be with the sole intention of ensuring the health, safety, and well-being of everyone involved.

Season 2, Grandmasters: Last Call, will feature the top four of each Season 1 region, joined by the top four players by Masters Tour Points from the last three Masters Tours of 2021 and the first three of 2022. This group will form a singular 16-player global region. The final four-week season will feature high-stakes matches, with the winner advancing to the 2022 World Championship.

We’ll have more information on the specific format for Season 1 in February! 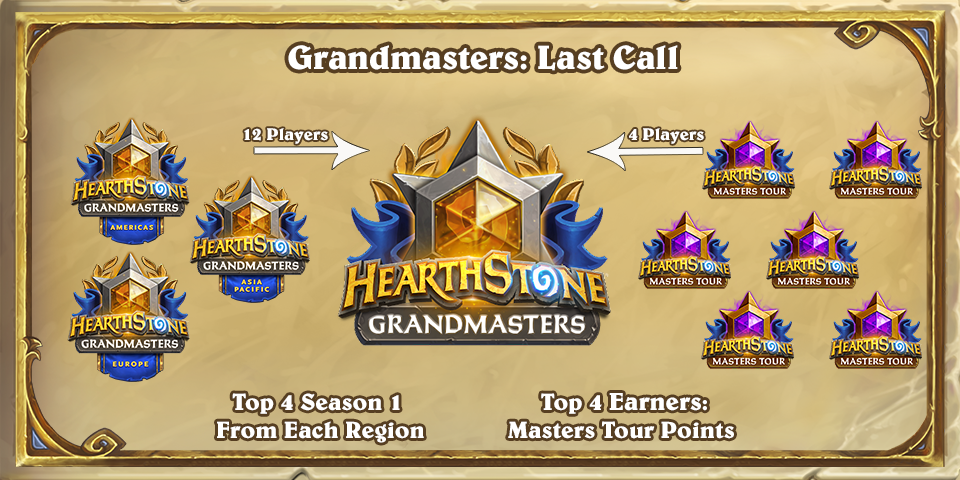 Distinct from the competitive constructed ecosystem, we are thrilled to introduce the new Battlegrounds: Lobby Legends! Throughout 2022, players will be able to compete for a share of a $500,000 (USD) prize pool spread across multiple one-off events. Lobby Legends is an opportunity for us to fully explore what works best for a new Battlegrounds program, and we are excited to find new ways to have fun with our broadcasts over the next year.

Each Lobby Legends will be a global event, featuring top Ladder players from Americas, Asia-Pacific, Europe, and China. Day 1 will feature group play, with players receiving points each match based on final standing. The top players from each group will advance to a second-day playoff.

We’ll have details on specific events dates and qualifying schedules in the coming months! 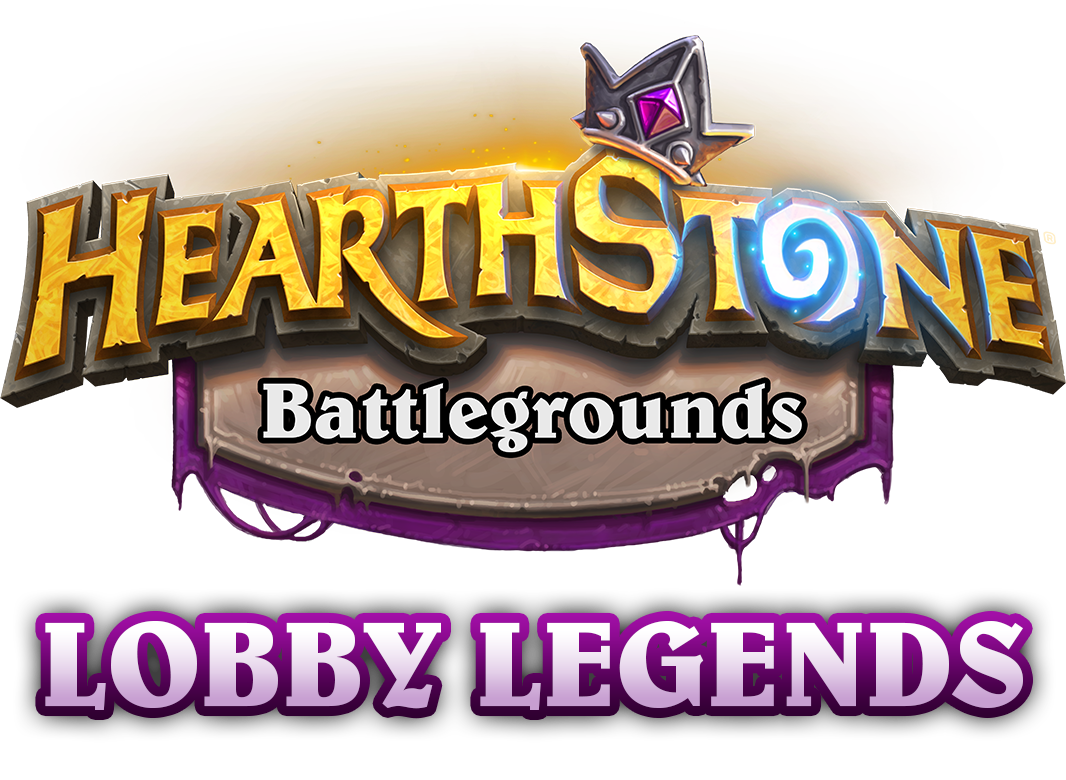 Hearthstone esports should be a place where players can come together to bond over this game that we all love, and to celebrate each other’s passion and skill. Our intention with the 2022 changes is to better foster that spirit of community that drew so many of us to Hearthstone in the first place. We are excited to start the new year off with these changes, and hope you are as well! Please let us know your thoughts, feedback, and questions on Twitter using #HSE2022. Together, we will have a fantastic year of competitive Hearthstone!