Join Us for the 2015 Hearthstone World Championship!

The Hearthstone World Championship is the largest Hearthstone tournament in the world, where 16 exceptional players from around the globe come together to duel for glory, prizes, and the esteemed title of World Champion. This massive tournament is preceded by months of Ranked Play seasons, invitational tournaments, community tournaments, and Fireside Gatherings where players compete to earn points in their bid to secure a coveted spot in a Regional Qualifier event. 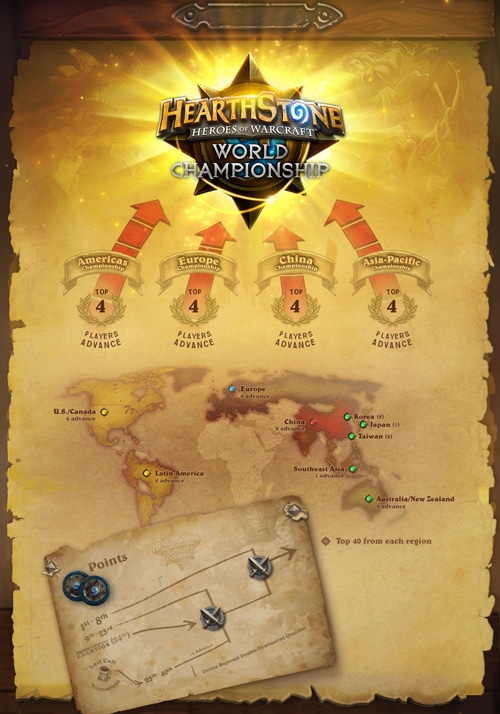 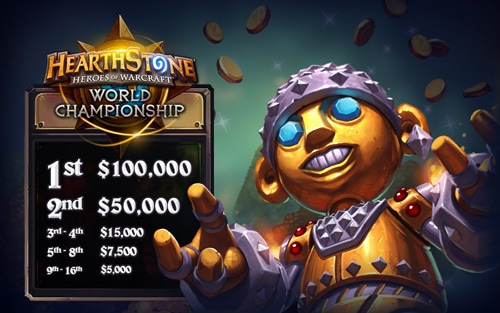 The Hearthstone Regional Championships decide the 4 players from each region who will make up the 16 players attending the Hearthstone World Championship. The Americas, Europe, China, and Asia-Pacific regions will each have Regional Tournaments where 8 of the most talented players from their respective regions will compete for 4 representative spots at the Hearthstone World Championship. The Americas region consists of eligible countries from within North America and Latin America, while the Asia-Pacific region includes eligible countries from within Korea, Taiwan, Southeast Asia, Australia, New Zealand, and Japan. The Hearthstone Regional Championship tournament format is as follows: 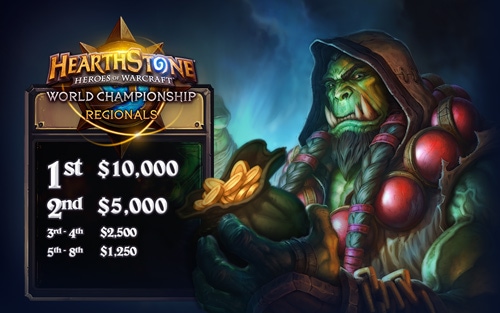 The Hearthstone Regional Qualifiers will take place just before the Regional Championships. Players from eligible countries within the regions of North America, Latin America, Europe, Southeast Asia, Australia, New Zealand, China, Korea, Japan, and Taiwan will duel at regional 40-player double-elimination tournaments. The top players who emerge from the tournaments victorious will clinch a spot at their corresponding Regional Championships. Players will be seeded into the 40-player tournament based on their standing in the 2015 Hearthstone point structure.

Players are able to obtain 2015 Hearthstone World Championship points through Ranked Play seasons as well as through Blizzard-sanctioned tournaments. Points received are based on performance, with better results awarding more points. Players who achieve a minimum of 2 points by August 31 will be eligible for their regional Last Call Tournament, which feeds into their corresponding Regional Qualifiers. The 23 players per region with the highest point totals will receive advanced seeding in their Regional Qualifier and do not need to play in the Last Call Tournament in order to qualify. Any event that will receive points must follow the below criteria and submit all information to the Blizzard eSports team for review and acceptance. Any event that will receive points will be posted on PlayHearthstone.com no later than 2 weeks prior to the first round of play.

All events must also follow these criteria to be eligible for awarding points:

Eligibility for Citizens: If the player is a citizen of an eligible country for the Hearthstone World Championship, the player must provide a copy of a valid photo ID with a current address within the country.

Players Training Outside of Their Home Region: Players who are a citizen in a country within a Hearthstone World Championship region will be allowed to participate in that region’s Last Call Tournament and Qualifiers regardless of their current residency status.