If you're headed to San Diego Comic-Con in July, don't miss out on the exclusive merchandise we'll have at the Blizzard booth! Whether you're looking for an adorable StarCraft collectible or something special from World of Warcraft, we have you covered. Our San Diego Comic-Con exclusives are a limited run produced only for the convention, so make sure you're ready to grab them early. We hope to see you there!

This soft, huggable, and slightly murderous Zerg buddy is ready to keep you company at night!  Transforms (at will) from Zergling to Baneling with the pull of a zipper. The exclusive San Diego Comic-Con color scheme is limited to 2,000 pieces.

She’s cute.  She’s deadly. Mini Sylvanas is the first in an exclusive new series of micro action figures. Limited to 2,000 pieces, so you’ll have to act quickly to snatch up a Banshee Queen of your very own.

With his big, adorable eyes and bold colors, Funko’s vinyl Shadow Illidan is sure to find a way to adorably corrupt your soul. Shadow Illidan is a Comic-Con exclusive variant of the upcoming Funko POP! Vinyl Blizzard line of toys and is limited to 750 pieces at the Blizzard booth and 250 at the Funko booth.

Blizzard will be the exclusive retailer for the Hardcover Edition of Udon’s new art book collecting fan-created tributes to the Warcraft universe. Only 300 copies of this Comic-Con exclusive will be available.

Show off your impressive item level by equipping our new Epic Purple Lanyard in your neck slot! This lanyard features a custom-embroidered stat tag, four-color purple ribbon, and a rotating lobster claw clasp.  These lanyards are available on a first come, first serve basis to visitors at the Blizzard booth.

Korean Papercraft comes to the United States with Diablo, Thrall and Raynor models. Comic Con will be the US premiere of the new Korean product line by MOMOT. 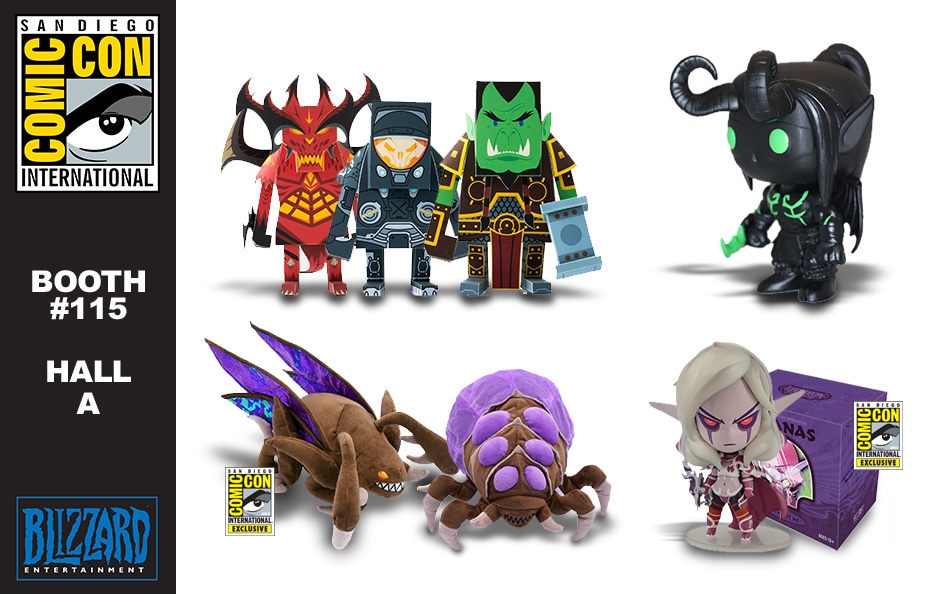