Are you as excited for Hearthstone as we are? Here at Blizzard, we’ve had the opportunity to test, tweak, adjust, and analyze some of our favorite Hearthstone cards in a wide variety of decks. While one Mage may be pummeling their opponents with blasts of frost and sharpened lances of ice, another Mage player may be tactfully hiding behind a wall of protective minions until they can amass enough Spell Power for a final powerful Pyroblast! I’ve pulled a few Blizzard employees aside to ask them one important question: What are your favorite Hearthstone cards? 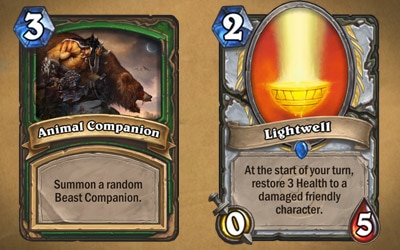 I love the Animal Companion card because I love its versatility in any Hunter deck, but it really shines in my eyes when I use it to summon one of Rexxar’s animal companions right out of the pages of World of Warcraft! Plus, the art is absolutely amazing. Rexxar doesn’t go anywhere without his trusted bear Misha, and the art really emphasizes the bond between the half-orc and beast.

Lightwell is an awesome Priest card all around. Priests are fantastic healers, both in World of Warcraft and in Hearthstone, but Lightwell, at 0/5, boasts an incredible amount of health for just two mana on top of its incredibly potent healing power. It’s great to buff Lightwell with cards like Divine Spirit and Inner Fire and put it on the offensive to give your opponents a sunburn they’ll never forget! 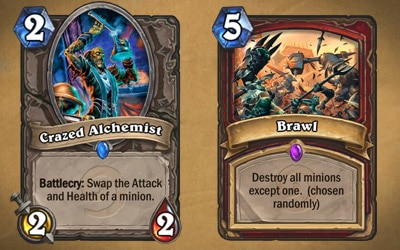 I love the Crazed Alchemist because it has a lot of very practical uses and at the same time lets you do really interesting and unexpected things. The alchemist is a 2/2 and when it comes into play it swaps the health and attack of a target minion.   The practical side is reversing the stats on a Shieldbearer or Nat Pagle and instantly killing it because it had an attack of 0 and now has a health of 0 and so it DIES! Boom. On the crazy side, I like reversing the stats of the Mogu’shan Warden and turning a 1/7 into a 7/1 and using it to kill a big creature (or on the other side turning an enemy Mogu’shan Warden into a 7/1 and pinging it for 1 damage to kill it). Not only that, but he only costs 2 mana and he’s crazy to boot! What a bargain!

How do I love Brawl, let me count the ways! First off, Brawl has a great visual effect with a giant cloud of Looney Tunes-style smoke that all of the minions jump into in a giant fight to the death. Then you get the emotional payoff of the dead minions being kicked out of the smoke one at a time until only the victor remains. Every time I play the card (or my opponent does), I start chanting the name of the minion that I want to live. It often goes a little like this . . . “Come on Hogger, you can do this Hogger, Yup let that Shieldbearer die, you still got this Hogger . . . NOOOOOOOOOO!”

It has a great effect and a great emotional payoff. I love it. 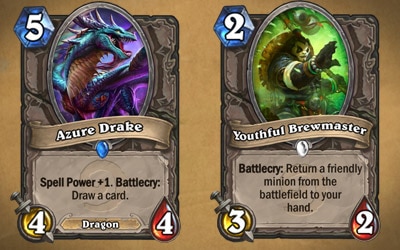 The Brewmaster starts as a 3/2 for 2 mana, which by itself is pretty good in the early game. Then, on top of that, you get this awesome ability to send a friendly minion from the battlefield back to your hand. Have a knife juggler that was silenced? No sweat! Pop him back to your hand and then recast him. Or how about sending a Houndmaster back to your hand so you can recast it and use its Battlecry again to buff yet another minion? You can find all kinds of fun ways to use this card.

First off, this guy replaces himself in your hand by giving you another card as soon as he shows up on the battle field. Then, on top of that, he’ll juice up your spells by providing you with +1 to Spell Power. On top of all that, you now have a pretty meaty 4/4 on the board to mess up your opponent. He’s thus got a ton of bang for the buck for the “oh-so-reasonable” price of 5 mana!

Have favorite cards of your own that you’ve seen so far? Tell us your favorites in the comments below!