One of the most iconic raid dungeons in World of Warcraft, the floating citadel known as Naxxramas, will soon make its debut in Hearthstone with Curse of Naxxramas: A Hearthstone Adventure. Today, we’re going to take a look into the history of Naxxramas for those of you who are unfamiliar with the undead terrors that lurk inside the necropolis’ creepy corridors.

Kel’Thuzad: A Thirst for Power

High above the bitter cold of Dragonblight in the continent of Northrend, the ancient Nerubian necropolis known as Naxxramas looms in the skies, casting a dark shadow on the barren tundra that lies beneath it. Safe from most terrors that may threaten it, Naxxramas is an effective holding ground for a host of undead horrors, ready to strengthen the influence and reach of the undead Scourge at a moment’s notice.

The archlich known as Kel’Thuzad sits at the seat of power within Naxxramas, coordinating the normally mindless Scourge into a fighting force for the Lich King. In his mortal days, Kel’Thuzad was once a powerful human mage and high-ranking member of the Kirin Tor, working under the great Archmage Antonidas, leader of the Kirin Tor at the time. The Kirin Tor had a wealth of secrets and knowledge at their disposal, and Kel’Thuzad spent countless hours devouring every bit of knowledge he could get his hands on—even the darkest and most unthinkable of arcane arts, such as necromancy. He became increasingly more reclusive and shunned by his peers the further he delved into forbidden magic.

The Lich King sought out Azeroth’s most powerful and ambitious individuals to bend to his will, sending out a mental summons to those he thought could easily be swayed by the promise of power. Kel’Thuzad was the first to answer the Lich King’s call. He saw the power the Lich King held over the undead and desired such power for his own, so he offered his services as a mage to the Lich King in whatever manner he desired. After a long, tortured journey to the frozen wastes of Northrend, Kel’Thuzad knelt at the feet of the Lich King and offered him not just his loyalty, but his soul as well.

“As my lieutenant, you will gain knowledge and magic to surpass your most ambitious dreams. But in return, living or dead, you will serve me for the rest of your days. If you betray me, I shall make you into one of my mindless ones, and you will serve me still.”

The Lich King’s words were both a threat and a promise. Kel’Thuzad would become his lieutenant, carrying out the Lich King’s whims, but in return he would gain power beyond his wildest dreams. Kel’Thuzad accepted these terms . . .  as if he had much of a choice in the matter.

The lich Kel’Thuzad uses Naxxramas as a base of operations for the undead Scourge, separating the citadel into four specialized quarters to train his minions:

The Arachnid Quarter houses undead nerubians, an ancient race of intelligent arachnoid beings. Normally highly reclusive and suspicious of outsiders, living nerubians fought valiantly against the undead Scourge, but were overwhelmed by their numbers. While living nerubians were immune to the undead plague, nothing could prevent the Lich King from bringing back the fallen to join the Scourge in undeath. 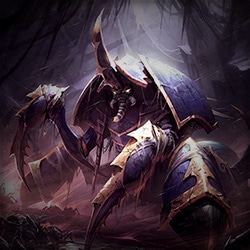 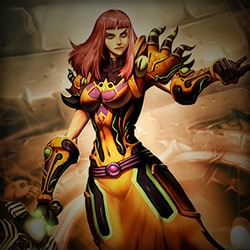 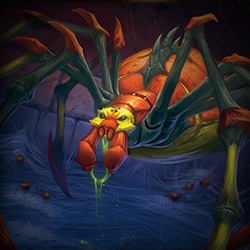 One of the minions raised by the Lich King was the Crypt Lord Anub’Rekhan. In life, he was one of the nerubians’ most powerful lords. Now, he guards the doors of the Arachnid Quarter that house . . .

. . . Grand Widow Faerlina. Once one of the high-ranking members of the Cult of the Damned under Kel’Thuzad, in death she breeds and takes care of the seemingly endless amount of arachnids that swarm from the depths of the citadel. A master of poisons, she has a keen understanding of what makes mortals suffer. The poisons she concocts comes from the spiderlings produced by . . .

. . . Maexxna, a massive spider taken from the depths of Northrend. She feasts on those foolish enough to enter the necropolis, producing spider after spider that Kel’Thuzad uses to his own foul ends.

Rife with monstrosities twisted by the undead plague, the Plague Quarter produces and refines the plague into highly efficient weapons, bent on destroying all of humanity as a part of Kel’Thuzad’s undead army. 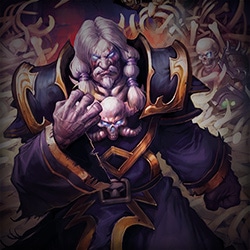 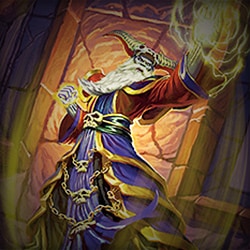 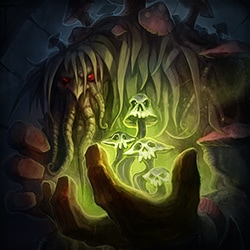 Noth the Plaguebringer was once a reputable mage of Dalaran, who heard the call of the Lich King in much the same way Kel’Thuzad did. Also driven by power, he accepted the summons to serve the needs of the Scourge with his skills in necromancy and curse-weaving. However, when Noth saw that the Third War was taking numerous innocent lives, he began second guessing his decision to join Kel’Thuzad. Kel’Thuzad swiftly dealt with Noth’s growing compassion by freezing the living heart in Noth’s chest.

Heigan the Unclean was the mastermind behind the magic of the cauldrons that quickly spread the undead plague through Lordaeron, corrupting not just the humans, but the flora and fauna in the area as well. The entire wilderness surrounding Lordaeron is now referred to as “the Plaguelands”—thanks in no small part to Heigan’s handiwork.

A prime example of how the plague manifested in the local flora and fauna is the twisted fen creeper Loatheb. In a twisted mockery of the plant kingdom’s natural ability to regenerate, Loatheb can summon deadly spores that quickly spread a sickening miasma that turns magical healing arts against those who wield them.

Many of the humans and their loyal mounts who were once soldiers in Lordaeron’s army now find their martial talents put to use in Naxxramas’s Military Quarter. Here, in service to Kel’Thuzad and the Lich King, they hone their skills far past what they could have accomplished in life. Leaders, trainers, and military coordinators—all use their talents to coordinate the Scourge into a powerful fighting force rather than a mindless horde. Many Death Knights begin their training within this quarter under the direction of its powerful lieutenants. 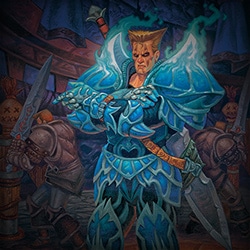 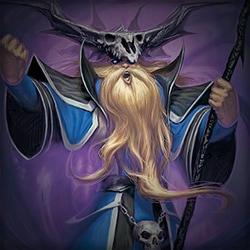 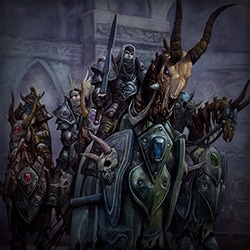 Instructor Razuvious is the trainer of the Death Knights, the fiercest and most loyal of the Lich King’s servants. His strikes are sure and deadly, and it is rumored that only students under his tutelage can withstand even a single blow of his deadly runeblade.

Gothik the Harvester, master of necromancy, teaches young Death Knights the power of summoning the undead to their aid. Even the most novice Death Knight can call the lifeless from their graves, thanks to Gothik’s dark and sinister techniques. Ghosts, ghouls, skeletons—none are safe from Gothik’s influence.

Kel’Thuzad’s royal guard can be found in the Four Horsemen, each with their own twisted powers at their disposal: Lady Blaumeux is a master of the shadow, able to drain the essence of life from those she encounters; Thane Korth’azz controls the destructive power of fire, and can even call forth fiery meteors from the skies; Sir Zeliek was once a paladin, so powerful in life that he can still wield the Light in death; and Baron Rivendare, once a friend of Kel’Thuzad, now continues to serve his old comrade in death with his corrupting powers and skeletal Deathcharger.

The Construct Quarter houses various nightmarish abominations stitched together from the once-living. A steady stream of toxic slime flows through this wing of Naxxramas; though it doesn’t pose a threat to the undead constructs that shamble about within, the viscous ooze is deadly to those who still enjoy doing things like breathing and having a pulse. 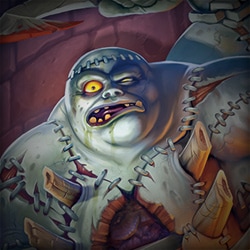 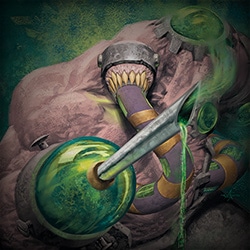 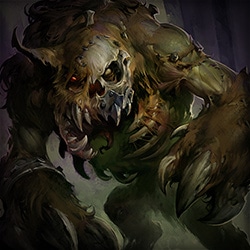 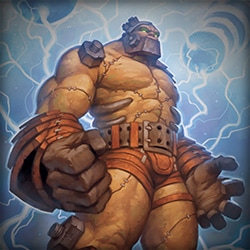 Patchwerk is one of Kel’Thuzad’s most powerful abominations—his strength and speed come as a shock to those that may face him in combat. Far from a sluggish, mindless undead, Patchwerk uses his immense power to pulverize any tiny meat thing that may face him with a flurry of potent, powerful attacks. He just wants to play!

Grobbulus lurks deeper in the Construct Quarter, carrying the same ooze that flows through Naxxramas within its hulking form. Grobbulus is a flesh giant, the first successful one of its kind, created to build a formidable army capable of quickly spreading the undead plague. One of Grobbulus’ limbs has been replaced with a syringe, which it uses to inject the plague slime of Naxxramas into its enemies.

The undead plague-dog Gluth sits obediently within Naxxramas, awaiting orders from his masters. No doggie biscuit can satisfy Gluth’s ravenous hunger. It is rumored that Gluth can easily devour an army of undead on a daily basis, which Gluth uses to knit his own decaying flesh back together.

The final hulking horror that stands within the Construct Quarter is Thaddius. Pieced together from the flesh of the innocent, this massive abomination dwells in one of Naxxramas’ experimental laboratories, flanked by two huge wights—Stalagg and Feugen. Powerful bolts of electricity arc through the laboratory, supercharging Thaddius and his wight minions.

At the pinnacle of Naxxramas awaits Kel’Thuzad himself, who is protected by the ancient skeletal frost wyrm Sapphiron. 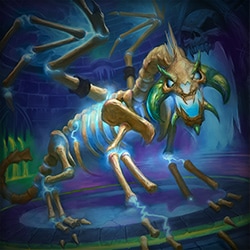 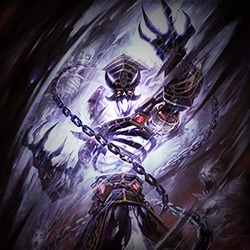 Once one of Malygos’ blue dragonflight, Sapphiron was slain by Arthas Menethil and raised from the dead to guard Kel’Thuzad for all of eternity. Like many of the blue dragonflight, Sapphiron had immense magical power, which was only magnified by the fact that the Lich King personally resurrected him to serve the Scourge. The chill of frost is at his command, and he uses his magic to defend Kel’Thuzad at all costs. 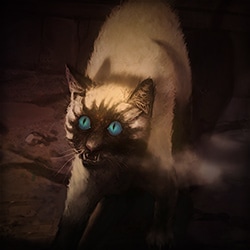 The true mastermind behind the secrets of the necropolis (just kidding—he’s just a cat!), Mr. Bigglesworth is said to be the last thing connecting Kel’Thuzad to his once mortal life. Meow!

Are you ready to face the terrors of Naxxramas in some epic card-slinging Hearthstone strategy? The wretched champions of the Scourge and their minions await your challenge in Curse of Naxxramas: A Hearthstone Adventure, coming soon!