You’ve triumphed against the highly-trained terrors of the Military Quarter. Now it’s time to pull yourself together and prepare to meddle with forces humankind was not meant to know in Curse of Naxxramas’s Construct Quarter!  Don't go falling apart on us, now. . .

The Construct Quarter is an ooze-soaked laboratory where Kel’Thuzad’s more scientifically minded minions assemble undead abominations amongst sparking tesla coils. It’s a hair-raising experience that’ll leave you in stitches, but best of all, deconstructing these vile reconstructions will reward you with all-new Hearthstone cards! 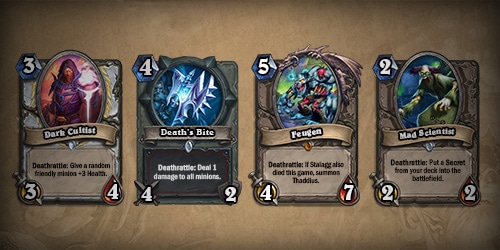 Your first steps into the Construct Quarter will lead you to Patchwerk. He’s called Kel’thuzad’s Avatar of War, but really this hook-wielding abomination just wants to play. . . with your insides. Putting Patchwerk six feet under will lure a pair of Undertaker cards into your collection.

Imagine a giant jelly donut, only it’s in a bad mood, made out of meat, and it’s filled with plague slime instead of jelly. Garnish with a syringe, and voila! That’s Grobbulus, a massive flesh giant and the second boss of the Construct Quarter. Deflating him will usher two cackling copies of the Mad Scientist into your collection.

Gluth the giant plague hound is the third boss players will encounter in the Construct Quarter. Who’s a giant, slavering, zombie-devouring menace? Who is it? Gluth is, yes he is! Bringing Gluth to heel will reward you with two copies of delicious* Zombie Chow for your collection. 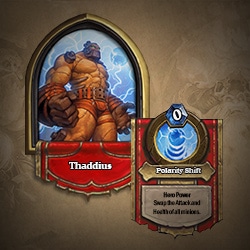 Thaddius, a positively huge bio-mechanical undead giant, is the final boss of the Construct Quarter and un-living proof that opposites attract. Wait. . . was that "attract" or "catastrophically repulse resulting in uncontrollable bolts of arcing electricity"? We can never remember. There’s no ohms, amps, or watts about it—his defeat will unleash a pair of Wailing Soul cards into your collection. Watt are they wailing about? We don’t know.**

Taking apart the bosses in the Construct Quarter will add a Legendary pair of wights to your collection: Feugen and Stalagg. Two wrongs don’t make a right; but two wights make a Thaddius!

The Construct Quarter also features two Class Challenges that will become available to those who have defeated the bosses on Normal Mode. Overcome these Challenges and you’ll be rewarded with new class-specific cards to expand your repertoire.

**We lied. It’s because they’re dead. We just wanted to use another electricity pun.