Join Us for the 2016 Hearthstone® Championship Tour!

The first points-giving event of the 2016 Hearthstone Championship Tour will take place at DreamHack Winter 2015 on November 26–29. Players are once again eligible to earn points through Ranked Play starting December on their quest to reach the Hearthstone World Championship at BlizzCon on November 4 and 5. 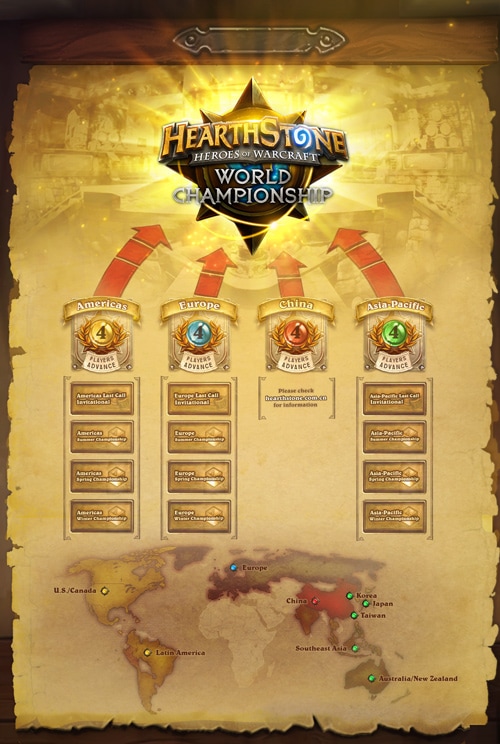 Based on feedback from last year’s tournaments, we’ve made the following changes for 2016:

Each Season Championship may have very different rules, check back after each Championship Season to find out the match format for the next events! The Winter Championships will use a modified Conquest format with a ban. Each player will submit four decks of unique classes for the Season Preliminaries and again for the Season Championship. At the start of each best-of-five series, each player will inform their opponent of the four classes that they have brought. The players will then inform the admin which of their opponent’s classes they wish to ban. From there, the players will compete in a standard Conquest format with their three remaining decks. 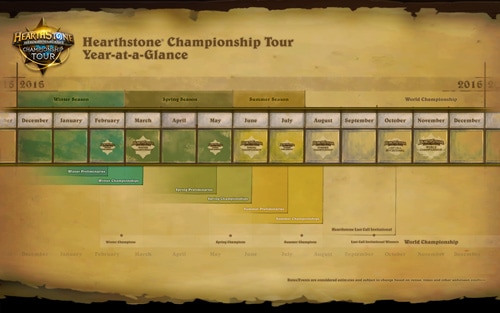 Players are able to obtain 2016 Hearthstone Championship Tour points through Ranked Play seasons as well as through Blizzard-sanctioned tournaments. Points received are based on performance, with better results awarding more points. Each Championship Season, 128 of the top points earners per region will be invited to participate in their region’s Season Preliminaries. After the preliminary tournament, points will decay and begin accumulating again to be used to determine top players for the next Season Preliminaries. Players’ performance in the entire year will be used to evaluate the 8 participants of each region’s Last Call Invitational just prior to the Hearthstone World Championship. Any event that provides points must follow the approved criteria and submit all information to the Blizzard Esports team for review and acceptance. Any event that will receive points will be posted on the PlayHearthstone.com ‘Upcoming Events’ blog. See below for details about eligible event criteria.

Select Blizzard-sanctioned Hearthstone tournaments will take place at Fireside Gathering events. The winners (Tavern Heroes) of these tournaments will be entered into their region’s Season Preliminaries alongside the 128 players invited from the Rankings.

Season Preliminaries for Americas and Europe

The Asia-Pacific Championships includes the following regions; Korea, Taiwan (including Hong Kong and Macau), Japan, Australia and New Zealand, and Southeast Asia (including Indonesia, India, Malaysia, Philippines, Singapore, Thailand, and Vietnam). Each of these five regions will have its own regional qualifier. Korea and Taiwan will each have an additional seed awarded to winners of local Major events. Additionally, the 8th seed for Asia-Pacific will be awarded to the highest Asia-Pacific point earner at the conclusion of the Preliminary events. Check back on the localized blog for more information about each of the Preliminary events. 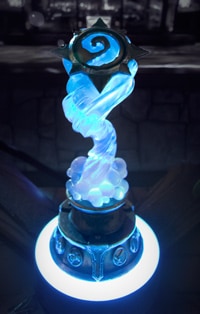 The Hearthstone World Championship will take place at BlizzCon on November 4 and 5, featuring 16 of the world’s best players. Three players from each region will be invited directly to the World Championship. The next top eight players per region will participate in their region’s Last Call Invitational to earn the final spot and a chance at a piece of the $1 million prize pool.

In order to compete in a Season Championship, Last Call Invitational, Season Preliminaries, or Fireside Gathering Tournament, all participants must be a resident of a country within the home regions for each event. All participants will be required to verify their Battle.net account and proof of residency.

The Hearthstone Championship Tour promises to be action-packed, offering players the chance to forge their own unique stories at the dueling tables. Climb the Ranked Play ladder, duel at tournaments both online and in-person, and accumulate points to secure your invite to the Hearthstone World Championship!

When is the deadline for submitting Hearthstone Cups and Majors?

Events must be submitted at least 15 days before they are set to run to be considered for points. The points players earn from your event will apply to the next available Championship Season. Players are only eligible to earn points once each week (Monday to Sunday) from their highest points-earning event.

What events are eligible for awarding points?

All events must follow these criteria to be eligible for awarding points:

Can we invite players to our Hearthstone Majors?

Players can be invited to Hearthstone Majors and have their spots reserved for the tournament, but they may not receive any special byes. They can be seeded in the same round as other openly registered players.

Can I compete with two different BattleTags in Ranked Play?

The terms of the Battle.net EULA must be followed at all times. If an individual has two eligible BattleTags, each BattleTag earns points individually. Points earned in sanctioned tournaments or cups will be awarded to the BattleTag that was used in that competition. When it is time to check for eligibility in the Last Call Invitationals and Season Preliminaries, an individual player may only compete with one qualifying BattleTag and will use the points earned by only that BattleTag.

What countries are eligible to participate?

See the official rules (English, French) for a full list of eligible countries

Details regarding the China’s involvement can be found on the official China Hearthstone website.

I have moved countries since I created my Battle.net account. How do I update it?

Can I compete in Ranked Play from a region that isn’t where players of my country normally play?

Yes, you can compete in any Ranked Play to earn points for your BattleTag. For each season, you will earn points based on the best ranking in any region that you placed. You will not be able to earn points from two or more regions in the same season.

I’m from Australia and my collection is on Americas, but I will compete in the Asia-Pacific Championship. How will I compete with players from Korea using different collections?

At onsite Championship events, to provide an even playing field for all competitors, players will be provided accounts that include all currently available cards for that tournament.

I’m a Hearthstone event organizer. How do I make sure my event can award points to players?

Check the eligibility criteria listed above in the FAQ and submit an event application. If you have any additional questions, please email us at esportsteam@blizzard.com!