A New Way to Play

Exciting changes are coming to the Tavern! We’re proud to announce that we’re introducing game formats to Hearthstone! Whether you’re just getting into Hearthstone or you’re a seasoned veteran, the new Standard format will help keep Hearthstone fresh, exciting, and accessible for years to come, while the Wild format will preserve everything you already know and love about Hearthstone!

The New Standard
Standard is a new format in Play mode that allows players to go head-to-head using only the most recently released Hearthstone cards. You’ll play Standard using a deck built solely from a pool of cards that were released in the current and previous calendar year, along with a core foundation of the Basic and Classic card sets (which will always be valid for Standard). You’ll be matched against other players who are also using Standard decks.

Standard is only available as a format in Friendly Challenges, Ranked, and Casual play, so it won’t affect Arena, Solo play, or Adventures.

Wild Will Be Wild
Wild is our new name for the Hearthstone you already know, because it’ll be the format where anything can happen. While Standard puts a bright spotlight on recently released cards and brings a more balanced experience, when you queue up for Wild, you’ll be cozying up with the crazy fun of Hearthstone you’re already familiar with. Of course, as more and more cards are added over time, the wilder and more unpredictable Wild will be!

In terms of gameplay, nothing is changing for Wild: you’ll be able to finish quests, earn gold, rank up on the ladder, get card backs, earn Legend rank, and use all the cards you’ve already collected to build a Wild deck, just like you always have. When you queue up for Ranked or Casual play with a Wild deck, you’ll always be matched with other players who are also using Wild decks. 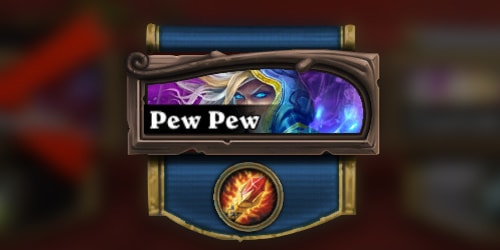 Ranking Up
When Standard is introduced you’ll be able to choose between Standard and Wild for Ranked play, and you'll have a separate rank for each format, so you can earn ranks and hit Legend in both Wild and Standard if you wish! You’ll only collect ranked rewards at the end of the season based on the highest rank you attained in one format or the other, but not both, so feel free to play whichever you like best!

Time for Reflection
The arrival of Standard format will also be an excellent time for us to take stock of Hearthstone. While normally we’re quite conservative about making balance changes to Hearthstone cards (and we’ll continue to be in the future), we’re planning to take the new Hearthstone year as a golden opportunity to re-evaluate a number of cards in the Basic and Classic card sets, including class cards, and make some long-considered adjustments.

More information on which cards are changing and why will be available as we draw nearer to the arrival of Standard format. 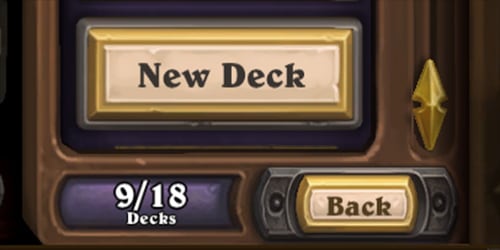 Release the Kraken!
Standard format will arrive this spring! When the momentous moment arrives, you’ll be able to build Standard decks using the following sets:

Curse of Naxxramas and Goblins vs Gnomes will not be part of Standard. When we release the first new Expansion each year, every set that wasn’t released in the same year or the year prior will cycle out and no longer be part of the Standard format.

That’s also when the new Standard year begins. Each new Hearthstone year is symbolized by one of the zodiac constellations twinkling in Azeroth’s night sky. The moment when a new constellation comes into alignment heralds the start of the year and a time of jubilation and raucous revelry wherever Hearthstone is played!

This inaugural Standard year will be known as the Year of the Kraken, so get ready to make some waves! 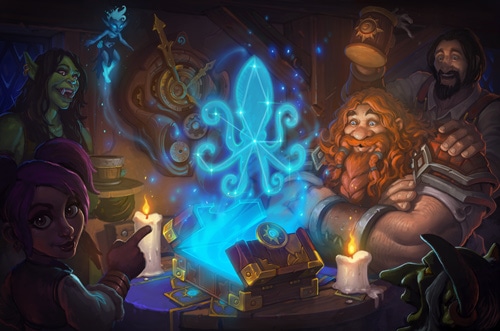 Gone Wild
Adventures and Expansions that are not part of the Standard format will no longer be available for purchase from the Shop—this year, that includes Naxxramas and Goblins vs Gnomes. If you want any cards you missed out on for Wild play or just to fill out your collection, you’ll be able to craft them using Arcane Dust—even cards from Adventures that were previously un-craftable. Speaking of Adventures, if you’ve purchased at least the first wing of an Adventure before it cycled out, you’ll still be able to finish acquiring and playing the remaining wings. 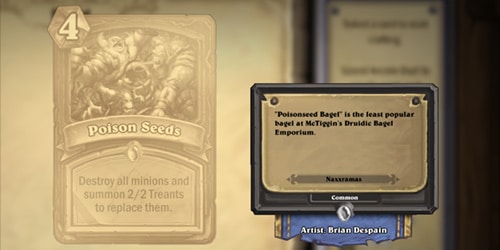 We’re Pumped!
We’ve worked hard to pave the way for Standard, and we’re really excited about all the great things this new format will bring to Hearthstone: fresher gameplay, more impactful expansions, and—since Standard will become the official format of the Hearthstone Championship Tour—an even more exciting competitive scene. All in all, we believe that Standard will end up being the most fun way to enjoy Hearthstone.

We hope you’re excited too, and we can’t wait to hear what you think.

We’re sure you have questions, so read the FAQ, and if you’ve still got questions, we’ll be happy to help!

I didn’t read the blog. What are you doing?
We’re adding formats to Ranked and Casual in Hearthstone’s Play mode. Standard format (Standard for short) will only allow decks that include cards released in the current and previous calendar year, along with a foundation of the Basic and Classic card sets. Wild format is the same Hearthstone you already know, which allows players to make decks from any card in their collection (including all of the cards allowed in Standard).

What’s a format?
In a card game, format refers to the rules and restrictions that govern what kind of cards can be included in a deck.

Why are you adding formats?
Formats allow us to achieve some important goals for Hearthstone. Standard format will provide a fresher and more dynamic metagame, give developers more freedom and flexibility when designing new cards, and will help newer players wade into Hearthstone more easily. Meanwhile, Wild format will provide a crazy, anything-goes experience that involves all the cards that have ever been released—just like the Hearthstone you’re already familiar with.

Why are Basic and Classic always part of Standard?
These cards serve as a foundation for Hearthstone. They help give Hearthstone its flavor, they have mechanics that are great for introducing new players to the game, and players who have taken a break can return to Hearthstone confident that they’ll be familiar with these cards.

How will collecting cards work?
Adventures and Expansions that are part of Standard format will be available for purchase with gold or real money. Card sets that aren’t part of Standard format won’t be available for purchase from the in-game Shop, but you will be able to craft any of those cards using Arcane Dust, including cards from Adventures that previously could not be disenchanted or crafted.

How will purchasing Adventures work?
You will be able to purchase Adventures that are part of the current Standard format normally. Adventures that are not part of Standard will no longer be available for purchase. If you already own at least one wing of such an Adventure, you’ll have the option to unlock the remaining wings using in-game gold.

Note that you can also craft and disenchant cards from Standard format Adventures, as long as you’ve already earned them by completing the necessary challenges.

Will Reward set cards such as Gelbin Mekkatorque and Old Murk-Eye be part of Wild or Standard format?
All current Reward set cards, including Promo cards, will be restricted to Wild format.

When Standard format arrives, the Captain’s Parrot and Old Murk-Eye cards won’t be given for collecting their associated classic cards, but can instead be crafted (and disenchanted).

Acquiring the Promo cards Gelbin Mekkatorque and Elite Tauren Chieftain remains unchanged: the normal versions of these cards can still be crafted or disenchanted, while the golden versions were acquired via special events and cannot be disenchanted or crafted.

How will random effects work in Standard?
Random effects (including summoning random minions or cards, the Discover mechanic, transformations, or any other similar effects) will only summon cards that are eligible for the format you are playing. Thus, random effects in Standard will summon only cards that would be usable in the Standard format. All cards are legal in Wild format, so such effects will function as they always have.

Can I earn rewards in both formats?
You can earn gold, complete quests, level your heroes, and earn wins toward Golden heroes in both formats in exactly the same way. Your end of season Ranked Play bonus and card back will be awarded based on the highest rank you obtained in either Wild or Standard, but not both. End of season bonuses and Arena rewards will only include cards that are usable in Standard format.

Will Arenas use Standard format?
Arena, along with other Hearthstone play modes, such as Solo play, Adventures, etc. are all Wild by default. With the exception of the occasional Tavern Brawl, Standard format only applies to Ranked and Casual play in Play Mode.

Will Tavern Brawls use formats?
Tavern Brawls have different rules each week, so some Brawls will be in Wild format, while others could be in Standard format, but they’ll all be crazy fun!

Will my Adventure decks be affected by the new formats?
Adventures will be in Wild format, thus allowing you to use your entire collection to build Adventure decks.

Can I play a Standard deck in Wild?
Yes! The Wild format includes your entire collection regardless of release date, including all of your cards that are usable in Standard format, so you can queue up for Wild using a Standard format deck directly.

Afterwards, you'll have a separate rank and match making rating for each format, so you can earn ranks and hit Legend in both Wild and Standard individually. You’ll only collect ranked rewards at the end of the season based on the highest rank you attained in one format or the other, but not both. Regardless of which format you earned your rewards in, end of season bonuses will be comprised of cards that are usable in Standard format.

Note that you’ll have one match making rating that is shared between both Standard and Wild formats when playing in Casual.

Will you feature the top 100 Ranked players for both the Standard and Wild formats?
Currently, we plan to feature only the top 100 players in Standard format.

With Play Mode split between Standard and Wild, will it take longer to find matches?
We don’t expect the introduction of formats to have a significant effect on the time it takes to find a match.

As a new player, I don’t see an option for Wild format in Play Mode. How do I play in Wild Ranked or Casual?
To unlock the option to create Wild decks and play Wild format, you can craft any card that is not part of  the current Standard format. If you already have such cards in your collection, then Wild format will already be unlocked by default.

What’s the new 2016 Expansion?
It’s really, really cool. We think you’ll like it. You’ll find out what it is soon™.