As we head into the Americas Spring Preliminary this weekend, we’d like to highlight the path that the qualifying players took to get here. There were a lot of ways to acquire the points necessary to qualify for the tournament: some players placed well in the Hearthstone Championship Tour’s Winter Season or travelled to one of the open Hearthstone Majors, while others participated in one of the many open online Hearthstone Cups that occur nearly daily. Most players earned some points by performing well in Ranked Play and achieving high ranks in Legend.

Below we’ll break down how the players competing this weekend acquired their points, with a close look at the varied paths the Top 8 points-earning players took to reach the top of the Point Standings. 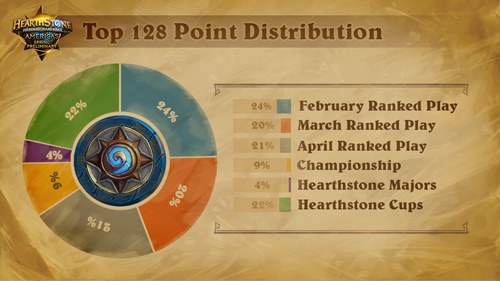 Based on the graph above, the majority of points from the Top 128 players were earned via Ranked Play. We can also see that the amount of points acquired from Hearthstone Cups was comparable to about one season of Ranked Play. Points from the Winter Season and Hearthstone Majors made up the smallest number of points, which makes sense as there were fewer of those events and performing well in them was often more difficult.

Now let’s take a look at the Top 8 points-earners who will be participating this weekend. 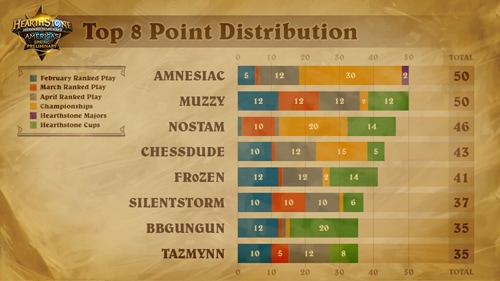 We can see from these point totals that these player profiles are vastly different.

While these may be some of the top Hearthstone players in the Americas, it’s clear that there are many paths that you can take to reach the top of the point standings. So who earned the most points in each category?

Do you have what it takes to join these players at the top of the leaderboard? You can start earning points for the Summer Season in Ranked Play, or by participating in one of the open online Cups or Majors. In the meantime, be sure to show your love for these players in the Americas Spring Preliminary this weekend. Who are you rooting for?