Ready to test yourself against Hearthstone’s best in the fiercest competitive Tavern Brawl experience available? If you think you’re up to the challenge, get your deck ready and prepare for an expedition into the wilds of Hearthstone, because the first ever Wild Heroic Tavern Brawl begins this week!

Heroic Brawls test even Hearthstone’s most experienced players as they vie for glory and in-game rewards! In the upcoming brawl, challengers will create a Wild deck using any cards from their existing collection and lock it in before their first Heroic Brawl match. No changes can be made to a Heroic Brawl deck once it’s locked in, so be sure to test your creations before you finalize your deck!

Once you’ve locked in your Wild deck, you’ll face off against fellow Heroic Brawlers on your quest for victory. Just like in the Arena, you want to shoot for 12 wins to get the best rewards—but if you suffer three losses, you’re out! 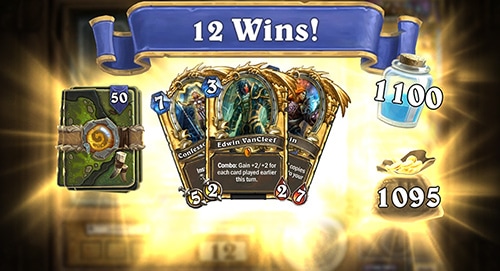 For Hearthstone’s best brawlers, 50 Journey to Un’Goro card packs, a heap of Gold, piles of Arcane Dust, and three golden Legendaries are waiting at the end of the 12-win road. The more games you win, the better the rewards—but the opposite is also true, so be sure you’re ready for the challenge. Are you ready to take on the best and brightest of competitive Hearthstone?

Heroic Brawl is not for the faint of heart, and is a unique experience meant for extremely competitive and experienced Hearthstone players.

Not quite ready to step into the ring? If prior Heroic Brawls are any indication, your favorite pro players and streamers will be joining the Heroic Brawl and you can watch them battle it out live on stream. The decks they’ll be playing during the Wild Heroic Brawl are sure to be impressive, so be sure to catch the action on Twitch.tv!