The first nine weeks of the Hearthstone Global Games (HGG) have showcased an incredible range of national team talent, but as we queue up Week 10’s matches, some teams are fighting for their tournament lives. You can see the complete standings on the HGG site, but here are the must-watch matches for the final week of the first stage:

China vs. Indonesia (Group A)

China and Indonesia sit with nearly even records in the middle of Group A. The outcome for the teams above and below them has been decided — Brazil and Bulgaria will advance, while Sweden and Switzerland have been eliminated. This final pairing pits the third and fourth place teams against each other to determine which of them continues onward.

Each of these national teams is relying on some amount of individual player strength: China will look to JasonZhou and LovelyChook for their initial wins, while Indonesia’s Fertygo is undefeated (3-0) thus far.

New Zealand cares deeply about this match, as a win over Russia here guarantees they advance out of this stage. Russia would cement their position as a top team in the HGG if they come out ahead of New Zealand; for New Zealand, every game point matters, as a loss here leaves them somewhere in the mix of the three teams who will finish with 3-2 match records in Group C (only two of which move on in the tournament).

Russia has an all-star lineup of players that includes 2016 Hearthstone World Champion Pavel, as well as 2017 Winter Championship winner ShtanUdachi. New Zealand’s challenge may well be that their most notable player coming into the HGG, Pathra, is currently 0-4.

Italy currently stands as the only undefeated team in the HGG. A win here for Italy cements them as the best team in this format currently. It’s worth noting that these players have some existing synergy: All the Italian players are also members of the same esports team, AtraX.

They will face off against Israel, who are in second place in Group E with a 3-1 match record. Israel’s record already qualifies them to advance to the next stage, so this match primarily determines which team has better seeding going forward. This team has gained some notoriety and acquired fans for their on-stream personality (just look at that hat!):

Group H has been tough, with the powerhouses of the Ukraine and the Czech Republic both advancing handily with 4-1 match records. The fight for third place and the last opportunity to move on to the second stage rests on the final match between Belarus and the Philippines — if Belarus wins, they advance with a 3-2 record. If the Philippines win, they will edge ahead of both Croatia and Belarus with the better game win-loss record.

Belarus are coming in on a two-match win streak, and look favored over the Philippines — who have thus far only successfully bested Germany, the last-place team in the group — but the Filipino team typically play sitting together, as shown below. That coordination may give them the edge they need to eke out a critical win here. 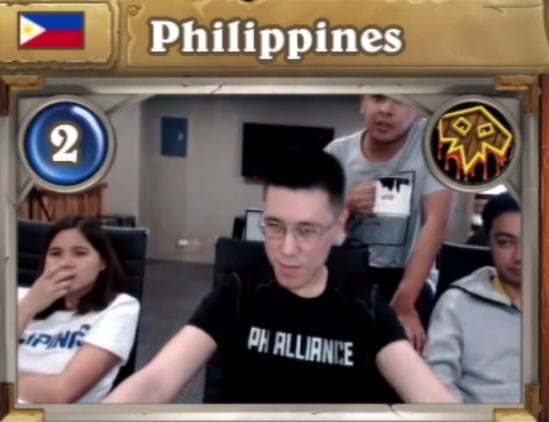 The Hearthstone Global Games continue this week with the final matches of our first stage, and only 24 of the 48 participating teams will advance. Catch all the action on the official Hearthstone Twitch channel.