Update: These balance changes are currently scheduled to go live on May 22 PDT.

In an update that will arrive some time after the HCT Playoffs are complete, we will be making balance changes to the following cards:

In update 9.1, we introduced a rule change to increase the consistency of Hearthstone game mechanics. The change affected precisely when Naga Sea Witch’s cost change was applied to cards. This allowed it to be combined with the cost reduction effects on giants, and as a result, it became fairly easy to reduce their mana cost to 0.

We think Hearthstone is better all around when interactions are consistent, and we like the fact that a Naga Sea Witch giants deck archetype exists. That said, we also understand that, with its current functionality, this deck can generate early board states that are unreasonable for most classes to deal with. By increasing the cost of Naga Sea Witch to 8 mana, the deck’s concept remains intact, but the combo is delayed until later in a match when more decks are likely to have the tools to handle the arrival of so many giants.

After set rotation arrived with the Year of the Raven, Spiteful Summoner became more powerful and consistent when used in decks containing 10 mana cost spells. This is because the pool of 10 mana cost minions in Standard is smaller, so players could more reliably count on getting a powerful minion from Spiteful Summoner’s effect. Even considering the deckbuilding sacrifices that an effective Spiteful Summoner deck requires, we think that increasing the card’s mana cost to 7 is more in line with the powerful outcomes that are possible when it’s used alongside cards like Ultimate Infestation. 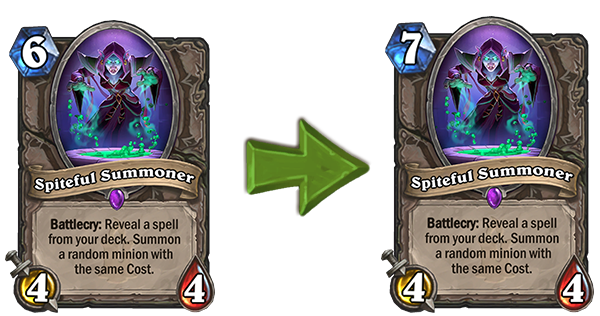 There are two aspects of Dark Pact that make it powerful. At a cost of 1 mana, it’s easily used alongside cards like Carnivorous Cube, Possessed Lackey, and Spiritsinger Umbra for big combo turns. It also gives Warlocks enough healing potential so that aggressively using Lifetap and playing cards like Kobold Librarian and Hellfire feel less consequential. We left Dark Pact’s cost intact so it can still be used as part of interesting combos, but lessened the healing it provides so Warlocks will need to more carefully consider how much damage they take over the course of a match. 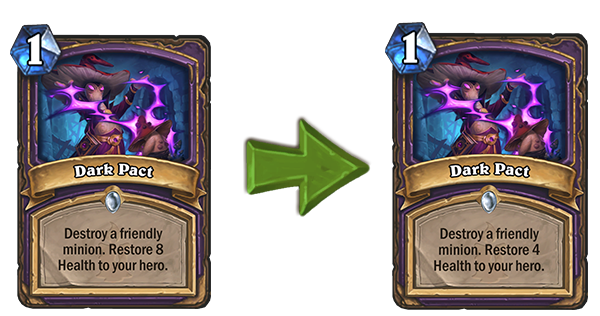 Some of the card combos involving Possessed Lackey present situations that are too difficult to deal with in the early-to-mid stages of the game. Increasing its mana cost to 6 delays some of those powerful card combos to turns that are easier for opposing decks to overcome. 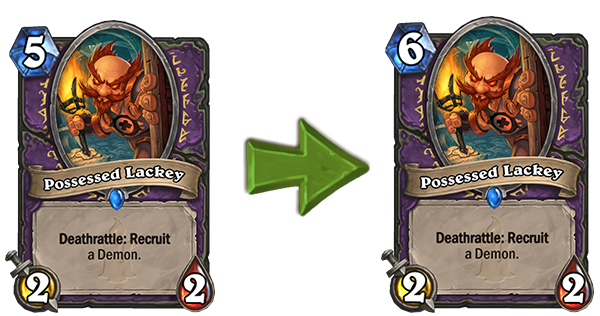 Currently, there are three popular Paladin decks: Even Paladin, Murloc Paladin, and Odd Paladin. Among the three decks, Even Paladin and Murloc Paladin have consistently been the most powerful two archetypes over the first few weeks since the release of The Witchwood. Call to Arms moving to 5 mana restricts it from being used in Even decks and reduces its power somewhat when used in Murloc and other Paladin decks. 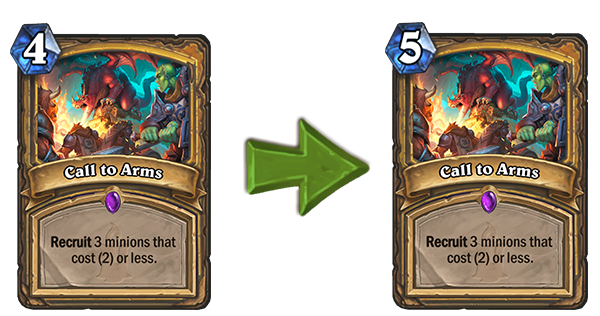 Note: As a result of this change, we are adjusting the “Greymane’s Alliance” deck recipe. It will now have two copies of Saronite Chain Gang in place of Call to Arms.

The Caverns Below – The quest reward, Crystal Core, will read: For the rest of the game, your minions are 4/4. (Down from 5/5)

The Quest Rogue deck uses a strategy that’s strong against slow, control-heavy and fatigue decks, but struggles against most other deck archetypes. There’s a fine line between being powerful against very slow decks and being powerful versus virtually all non-aggressive strategies. By changing the quest reward to make the resulting minions 4/4 instead of 5/5, Quest Rogue should still be a reasonable option versus slow, extreme late-game decks, but offer a less polarized matchup with more moderate control decks. 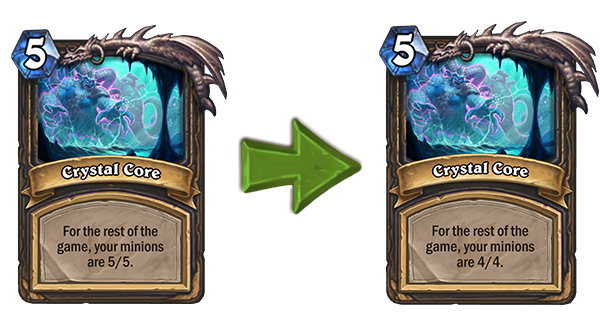