Today we’re ready to reveal the top of the mountain. Hearthstone Grandmasters is the pinnacle of Hearthstone esports, providing consistent and entertaining online-based competition between the very best Hearthstone players in the world.

Hearthstone Grandmasters will feature three regions—Americas, Europe and Asia-Pacific—with 16 players per region making a grand total of 48 players. Each region will be randomly separated into two divisions of eight players each. Players in each division will play a double round robin using the best-of-three Specialist format. After all matches are finished, players will be ranked within their own division according to the number of wins they accumulate. We will unveil the divisions at the HCT 2019 World Championship in Taipei on April 28 before the Grand Finals.

The top three players in each division at the end of each season will play in a six-player Grandmasters Seasonal Playoff. The finalist from each region for both 2019 seasons, plus two players from the China Gold Series—a total of eight players—will compete in the Hearthstone Global Finals at the end of the year for a $500,000 prize pool.

Following the conclusion of Season 2 of Hearthstone Grandmasters, each player who finished last in their respective division will be at risk of relegation. The top cash prize-earners from the Masters Tour program in each region will become eligible to receive an invitation to replace the bottom finishing Grandmasters in the 2020 seasons. 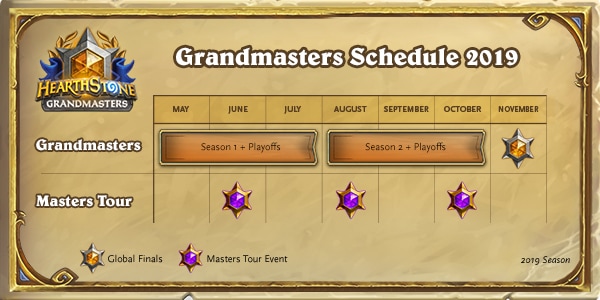 There will be two seasons of Hearthstone Grandmasters in 2019, each featuring eight weeks of online matches broadcast live on Twitch.tv/PlayHearthstone. Five matches will be broadcast every Friday, with five more matchups on Saturdays, and six on Sundays.

Mark your calendars, because Grandmasters Season 1 begins May 17! Our website will evolve as we get closer to this date, so please keep an eye out for a shiny new schedule page following the HCT 2019 World Championship to find out when your favorite players will be playing!