The card buffs introduced in Hearthstone's most recent update have thrown some curveballs in the deck lists submitted for Week 4 of Grandmasters. While classes are largely represented by Rogue, Warrior, Mage, and Hunter—we have one Token Druid submitted in each region, and a Mech Paladin from Cong "StrifeCro" Shu. You can check out the decks yourself on the schedule page. 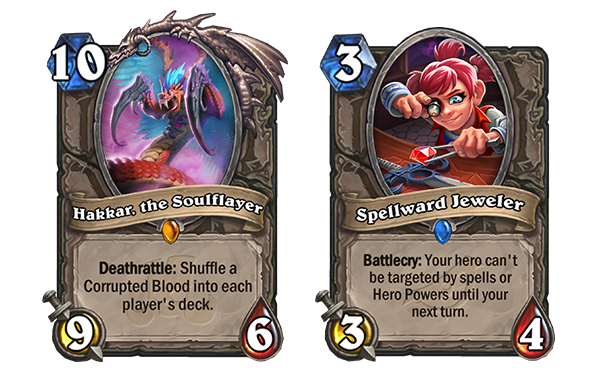 In terms of trends, both Linh "Seiko" Nguyen and Francisco "PNC" Leimontas have brought the addition of Hakkar, the Soulflayer with Spellward Jeweler in their secondary decks this week. We’ve also seen a few inclusions of Barista Lynchen in secondary decks for Bomb Warrior in the Americas and Asia-Pacific. For those wondering, the new Legendary Mech SN1P-SN4P was included in 7 primary decks, and 4 secondary/tertiary decks in total.

And Then There Were Two

Only Seiko, Jerome "Monsanto" Faucher, and Chris "Fenomeno" Tsakopoulos are undefeated at 6-0 in Season 1. What’s more, Seiko has not dropped a single game while piloting a different class each week. He’s up against Jon "Orange" Westburg and Pavel "Pavel" Beltukov this weekend. Do either of these fearsome competitors have what it takes to put a stop to Seiko's undefeated streak?

Eddie "Eddie" Lui is currently tied for 1st place with Frank "Fr0zen" Zhang in Division A of the Americas. Eddie brought Warrior again this week and is the only player to bring the same class all 4 weeks. This weekend he's up against James "Firebat" Kostesich, who needs every win he can get to make the cutoff for playoffs. Firebat has been reviewing his Grandmasters gameplay on Twitter, when he’s not retweeting videos of cuddly animals, that is.

Silvername vs. Bozzzton—Saturday, June 8, at 9am PT / 5pm CET

Both Vladislav "Silvername" Sinotov and Elias "Bozzzton" Sibelius have had a rough go of things in the first three weeks, with both players sporting 1 match win apiece. While the cards may not have been dealt in their favor so far, Week 4 could signal a turning point for one of these two competitors.

It’s a similar story for Dasol "Ryvius" Sim and Kim "che0nsu" Cheon Su in Week 4, where both Korean players have found themselves at the bottom of Division A in Asia-Pacific. Both players brought similar Bomb Warrior lists, with the primary difference being Ryvius's inclusion of Grommash Hellscream in his secondary deck. Ryvius won 2-0 when the two players met last in Week 1.

We’re happy to share with you the desk pairings for Week 4 of Grandmasters!

Tune when the broadcast goes live at 2am PT on June 7 with Jang “DawN” Hyun Jae taking on Wu "BloodTrail" Zong-Chang over at Twitch.tv/PlayHearthstone!