In this Hearthstone: Heroes of Warcraft card reveal, we have the latest intel from the front lines on one of the Warrior’s powerful class-specific cards—Commanding Shout.

Do you want to learn about the way of the Warrior? Do you have what it takes to be in command? What was that? Could you speak up? Say that again. We can’t HEAR YOU! Why the need to shout? 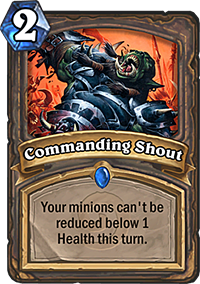 EVEN THE CAPTIONS ARE YELLING

*ahem* Sorry about all that. We got carried away. We’re just excited to show you what Commanding Shout can do for the bold (and brash) Warchief of the Horde, Garrosh Hellscream.

Commanding Shout keeps your minions alive—albeit barely—but barely breathing is good enough. In Hearthstone, you’ll often use your minions to attack your opponent’s minions. When you attack, if both your minion and the enemy minion die, it’s called a “trade.”

Commanding Shout makes sure you never trade. Upon hearing the bellowing roar of your Commanding Shout, your minions will survive engagements with enemy minions instead of trading. Sure, they’re probably standing on the precipice of death, but they’ll live to fight another day . . . or moment . . . whatever.

Some minions enjoy getting hurt. Check out this guy: 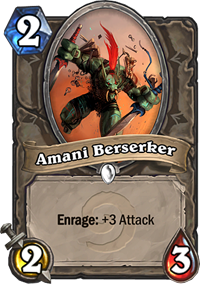 The Amani Berserker thrives in the midst of battle, as reflected by his Enrage ability. This troll gets +3 Attack while he’s damaged.

You have numerous ways to damage your minions and Enrage them. Some cards can deal direct damage to minions, including your own. You can also send your minions into battle, ideally attacking a weaker enemy. It can be tricky to find just the right opportunity to attack another minion without trading, though. That’s where Commanding Shout comes in. With this card, your rage-filled minions are guaranteed to survive any attack!

But Enrage isn’t the only reason you’ll want to keep your minions bruised and bloodied. . . . 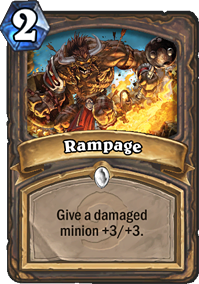 Rampage turns that nearly dead minion into a RAMPAGING POWERHOUSE for only 2 Mana!

Nothing feels better than watching your opponent deal a few damage to your minion, hoping desperately to finish the job on the next turn, only to see it become an unstoppable behemoth.

Warriors love to deal damage, but they also love to TAKE it. So next time you’re on the opposite end of the table staring down the son of Grom Hellscream, poised to launch a Fireblast at one of his soldiers, think twice before you hurl it. You might be playing right into his hand.