Raise Your Wrenches for the Mechanical Inn-vitational!

Arch-Villain Rafaam has sent Blastmaster Boom back to the drawing board, and now that he’s finished perfecting his pet projects, the League of E.V.I.L. is in desperate need of new test subjects. Whoever is most eager to impress during the upcoming Mechanical Inn-vitational could even find themselves promoted to E.V.I.L. Employee of the Month!

Blastmaster Boom has cooked up an exciting new format to test the mettle of these would-be top employees. Participants will be divided into teams of two players, and to prove their adeptness to Blastmaster Boom, they will initially craft decks using only the following: 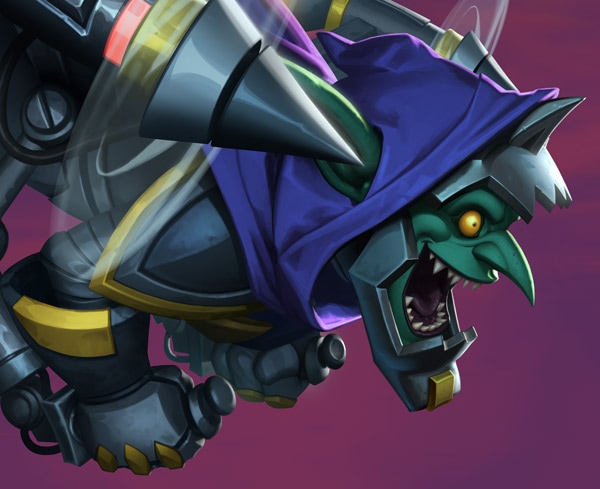 The Mechanical Inn-vitational will feature competitors from North America playing live on set against teams from around the world. Participants won't be able to earn gold through Arena, or from Ranked play wins or daily quests. Teams who secure a victory will earn a point (which they can spend on perks later in the tournament), and one set of additional packs, with the choices being:

To ensure a fair fight, all competitors will be given the same additional variety of packs that the on-stream teams open after they win a match. Teams will be able to modify one deck between each game, and before the finals, earned points can be redeemed for the following perks.

In order to keep these League of E.V.I.L. lackeys from blowing each other up ahead of time, we’re going to keep their identities a secret for now. But you can expect to see competitors from the Commonwealth of Independent States, Europe, North America, and South Korea regions.

Overseeing the mayhem will be the esteemed Bil “Jump” Carter, who, as host, will make sure no cheating ensues. Dan "Frodan" Chou and Michael "Heatwave" Lancaster will be on hand to provide commentary .

To find out who will be a part of the Mechanical Inn-vitational, stay tuned to your favourite players!

Card packs will be opened June 3 2019 on each participating player's stream. Check back for links to their stream once the players are revealed!

On June 4 2019, the Mechanical Inn-vitational will begin at 8:00 a.m. PST on twitch.tv/PlayHearthstone and on your favorite player's stream!

The Mechanical Inn-vitational is going to be one explosive event, so be sure to tune in! Want a full refresher on what Blastmaster Boom has been cooking up in his lab for the upcoming Rise of the Mechs update? Check out the blog here.