Watch and Learn with Trump

If there’s one thing we’ve noticed about Hearthstone, it’s that watching it being played is almost as much fun as pulling up a chair and playing a game or two yourself. Watching experienced players sling cards is also a great way to learn new tricks, build better decks, and improve your skills. That might be the reason why streaming has become such a popular pastime for both streamers and viewers alike.

We want to make it easy to find the people who are out there streaming entertaining and informative Hearthstone games. Among these luminaries you’ll find pro players and skilled amateurs who all share a common goal—to entertain viewers by sharing their knowledge of the game sprinkled with a few laughs along the way.

You can find a link to all of our streamer profiles on the forums!

This week’s featured streamer is Trump! 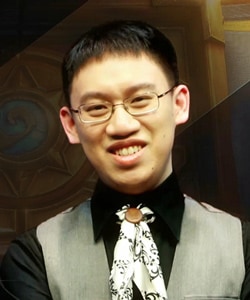 Trump has been a big part of the Hearthstone scene from the start. He competed at the very first Innkeeper’s Invitational at BlizzCon 2013, and has been a consistent presence in the competitive world ever since. While he’s competed in tournaments and done some shoutcasting , Trump is best known for his popularity as a Hearthstone streamer. His Arena tier lists have helped thousands of players make the most of their Arena drafts, and he can be regularly seen building ‘free to play’ decks and taking them to Legend in Ranked Play.

To help everyone get acquainted, we asked Trump a few questions:

Q: Tell us a little about your stream?
A: Enter my head!  As the Mayor of Value Town, I try to spread my teachings of value with an informative streaming style. When you watch my channel, you might notice that I try to talk through my play and why I made it, what I expect the opponent to play and why, and then what I expect to play on the turn afterwards.  On a competitive level, I aim to place highly on the constructed ladder and get twelve win Arena runs. I play a variety of decks at the top Legend level, and have a 74% win rate in the Arena, with an average of 8 wins each go. For a bit of a challenge though, I occasionally do "Free to Play" runs, in which I create a new account and try to hit Legend in a short amount of time with a deck created using only cards gained by playing naturally.

Q: How did you get into Hearthstone?
A: A background in Magic: The Gathering and a long history with Blizzard games including World of Warcraft and Warcraft III made Hearthstone a natural fit.

Q: Do you have any advice for new Hearthstone players?
A: Don't be fooled into thinking that the goal of the game is to bring your opponent from 30 to 0 health. That's the ultimate goal. The bigger picture is that Hearthstone is a game in which cards are more important than health. Get value and make sure you use your cards to efficiently deal with your opponent's cards, rather than trying to aim for your opponent's face and health total.